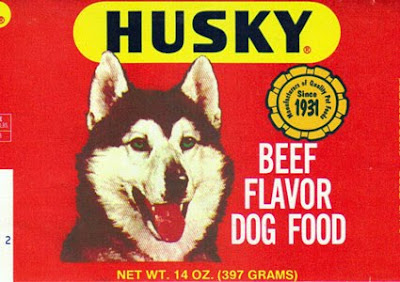 For the last in our series of collectible dog food labels from the early '90s, which is just a sample of my much bigger collection, we're going to feature the Husky Beef Flavor variety. It's obviously quite a bit different from the Strongheart labels we've been looking at all week, while still being in the same family, with Strongheart also being the producer of Husky.

It's been a while since I've fed any of my dogs Husky, and I haven't seen it around for quite a while. So I don't remember what it looked like. What I do seem to recall was that Husky was a little cheaper than regular Strongheart, so, who knows, maybe it was made with the meat of elderly cattle. Where their firmness had given way to drooping. And perhaps it was a little grayer looking, I don't recall.

I really like how red the tongue is on the dog! Four inches up and he could've been Rudolph. And Huskies hang out at the North Pole, so Santa could've used one of them. That's quite a dog too. The little dip between the eyes makes the white part of his face into a heart, how cute. And he has those big ears, his hearing was probably very keen. He was on the lookout for a downed cow, something to eat.

I'll try to describe the color scheme on the label, in case you have a hard time recognizing it yourself. The dominant color is red, with the big Husky logo in a yellow oval-ish background. Or could I say a rectangle with rounded ends? Or shaped like an elongated pill capsule.

As always, I will describe again the flavor, then check the ingredients to see if that ingredient is indeed present. The flavor, as already stated, is Beef. Now to the ingredients (not pictured), glancing through, I see, here it is, "Beef By-Products." But, hey, what about this? It also says "Poultry." Obviously meaning that elderly cow meat needs to be supplemented by poultry, because all alone elderly cows are no longer spring chickens.

Note: Just checking my collection, I see I have two of these Husky labels. I would be willing to trade it for any Milk-Bone box put out between 1915 and 1926.
Posted by dbkundalini at 9:08 PM