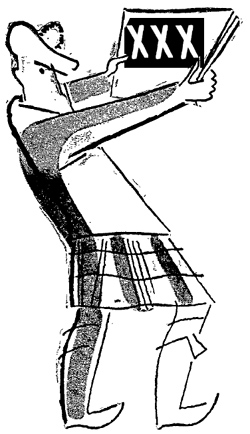 The revival over at Pastor Wadd's church is in full swing. Brother Wadd, as I've written before, specializes in counseling for sexual addictions, and therefore tends to see everything through those lenses.

It's invigorating, I think, to have the great drama of flesh vs. spirit ever before us, since of course we can easily relate. We just like to keep it quiet that we do. Although his laser-like stare -- he doesn't know anything except direct eye contact -- is sure to pierce the most innocent facade.

Anyway, the guest speaker this week, for a week of revivals, is Brother Kilt. All these guys in our particular sect stick together. They go to conferences and camps, seminars and workshops, and communicate daily via their email list, all of it to help them help us more. And for the most part, speaking for myself anyway, thanks to their efforts, I believe we're pretty close to perfect victory over the temptations of the flesh.

I know how it's been for me, and I don't think I'm bragging, but it's been four or five years since I've made even a wayward glance, let alone had an actual lustful thought. I vaguely recall how it used to be and can testify that this is much better. Because invariably the targets of my drooling stare were already taken or not worth having.

Brother Kilt took the platform after a rousing hour of choruses, wiped his potato-shaped brow, and calmed the congregation down before setting in with the real business at hand, leading us to deliverance over the carnal desires, where it was still needed. I looked around, trying to figure out who might be squirming the most. It might have been me, but I hoped not; I've had a number of chigger bites lately and sometimes I have to fidget to scratch the itches, and I didn't want to send any wrong signals. Fortunately, Brother Kilt was generally looking the other way when I had an especially compelling itch.

Well, I can't remember everything he said, of course. Only that he started in with the text about all temptations being common to man, but God has made a way over, through, and around them for the child of God. I've heard this text enough, I should know it by heart. It's in 1 Corinthians somewhere. He went into that about the Apostle being single and yet somehow kept himself from burning in lust, which had to do with his closeness to the Lord. I felt a bad chigger bite on my left bun and shifted uneasily in my pew.

I was looking around and saw a new couple back by the door, squirming a little. Brother Kilt obviously knew them, probably from counseling, and directed a few words their way, which is merciful on his part. You don't conquer the flesh by p-footing around the issue, and the Bible names names, so there's no reason we shouldn't be direct. After all, as Brother Wadd has said a number of times, the Lord calls each one by name, so there's no reason we shouldn't put it out there, who we're talking about. Just so it isn't me.

Brother Kilt was feeling led to be direct, and he was to tremendous effect. "I'm looking around the room, and I'm happy to say that I can tell that most of you are pure. You just need the counsel you're getting to help keep you that way, because the temptations are real. But you've got it good in here, because out there -- and you're in the world everyday -- you know that 99% of them are horny all the time. They're looking up, they're looking down, they're checking it out, they've always got something on their mind ... a crevice, a crease, a knothole in the tree. Amen?"

And that's true. We work with them everyday, some of us do. As for me, I hear tell of many things, mostly on TV. The thoughts people have are rife with something that isn't good. Just turn on any soap opera. Most of them are on their 10th marriage and they're already sleeping with number 11. I've seen it. They're whom the 99% look up to. So naturally every crevice, every crease, even the knothole holds its attraction.

Brother Kilt continued, "Notice I said most of you are pure. I tend to choose my words carefully. Most of you, but not all ... is what I mean to say. Of course I'm referring to you, Delores, and you, Gilbert," directing his attention to the new couple back by the door. "There's still some troubles, aren't there?" They looked helpless, but seemed generally appreciative of everyone's concern, giving me the perfect chance to scratch a chigger bite on my upper leg.

The upshot of the evening is, this blessed couple confessed to numerous wandering glances and the variable thoughts that would generally accompany them. And for a second, less than a minute, the thought came to me that Delores looked pretty good, and easy, and that perhaps Gilbert might be good for a go, too. I moved up ever so slightly to get a better look, while also rubbing a chigger itch closer up my leg, when Brother Kilt glanced over, bringing me back to my senses, sweaty brow and all.
Posted by dbkundalini at 6:17 AM