Middle Fingerings I Have Seen 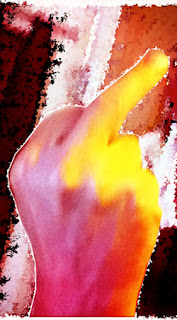 I wanted to wait till I saw four or five more fingerings to write this up, but who knows how long it might take for that.

They've had some streets closed in town, like they do in every town in the summer, and it's made for some major inconvenience. Traffic is down to one lane, and tempers get pretty short when it comes to all the red lights. You're way back there, the light changes, three or four guys from the sides are still making it through, then you realize you haven't even moved yet and the light is already red again.

I just happened to be at one of these bottleneck intersections, a frustrating one, and the nonstop heatwave wasn't helping. The traffic was going at its usual snail's pace, then it was backed up at the light a block away, with the cars stretching clear to the other block.

Most drivers don't pull out in the middle of the intersection, thereby blocking cross traffic, but stay back behind their own red light. But this one lady, an older lady, had crept through the intersection even though it meant she was going to be somewhat blocking cross traffic. Another woman, probably 30-32 years old, and probably out on an important errand and not wanting to be delayed, was coming in the cross traffic, when she saw her quandary. The first lady managed to scooch another two or three feet forward, meaning the cross traffic woman had a little more leeway after some seconds to make it through.

As she was going through, from the time she began her passage till she was definitely by, she had a very erect middle finger waving in the air toward the lady. Mercifully, it didn't appear that she saw it. But I saw the whole thing.

I'm going back to my distant memory archives for two other memorable fingerings. I was hitchhiking with a guy back in the '70s. I can't remember exactly where we were, but we had spent some time on the road and some time without a ride. There was an on ramp and a single guy was coming up it. We were beyond the on ramp and on the side of the road itself. It looked like he was sort of hesitating, like he didn't know whether to pick us up or not. Then he sped up and was going to keep going.

But the really memorable thing is that the guy came screeching to a halt right there on the highway. And we're thinking all kinds of bad things might be happening. We talked it over hurriedly about what we should do, which came down to something like this, if the guy meant trouble for us, at least one of us should run up and get in the car and drive it away. We wouldn't be stealing it, we were only thinking we might need to go for help. If both of us could get in, we'd escape danger. Our imagination turned out to be worse than what happened.

The guy put it in reverse and came back at a pretty good clip. And he said something like, "I don't appreciate getting the fuck finger!" I do remember he said precisely that, those exact words. My friend said something like, "And we don't appreciate" [exact words there] you acting like you're going to stop and then going on [just a paraphrase.] The guy was reasonably calm and explained that he had thought about picking us up, but seeing that he was only going a few miles up the road, he didn't think it would do us much good. Which was true; we were going hundreds of miles.*

Some local guys were playing basketball in the school gym. I don't know how it was arranged or anything about it, but I was there watching, and my dad was acting as one of the refs. What in the world ever qualified my dad to be a ref for these guys, I also don't know. It certainly wasn't one of his regular jobs. But apparently he knew enough about basketball to get the job done.

And these were big guys, like 17-23 years old probably, big tough guys. The story is more than just the "Fuck you." There's a bit that involved me. They didn't have anyone to run the clock and the scoring. So for some incredible reason that I still can't fathom -- and it still seems like a surreal dream, one of those dreams where you're not prepared for the task they give you -- they wanted me to do it. Me, a dumb kid who didn't know the first thing about running an electronic clock, keeping score, the intricacies of basketball, none of it. What button am I supposed to push? When am I supposed to do what? It was crazy. I still shudder.

Naturally, I caused all kinds of problems with the scoring, with getting the clock changed, with holding the buttons too long, pushing the wrong buttons, etc. Various ones would come over and fix what I had screwed up, until I screwed it up too many times, at which point I was dismissed from the job. I look back on a time when my confidence was really shaken, and it's likely that whatever insecurities I have were really set in motion then.

OK, the major fingering (or at least the outburst.) There was some kind of foul, the exact incident I don't know, although I do remember the name of the guy who was at fault (which I'll keep to myself, except I guess I could put his first name, Kenny). My dad called a foul on him, then the guy erupted, contesting it vigorously. But my dad stood his ground. He was a guy of great confidence, I have to give him that. These were big guys and this guy was very pissed off. But my dad was unyielding to all of it.

Then it happened, a big loud "Fuck you!" hurled at my dad by Kenny, and I'm thinking there was a middle finger as well. Wouldn't there be? Anyway, when that happened, my dad made the motion they make when a guy gets ejected from the game. And remember, this isn't professional ball or even a league as far as I know, just some guys playing in the gym! My dad threw the guy out of the game! The guy was there, still going ballistic, just let your imagination run wild what a guy like that would do. But by God, after a little bit of that, he stalked off to the dressing room and my dad had prevailed.

Don't ever finger anyone, because I'll be there to see it, and I will write you up for sure!