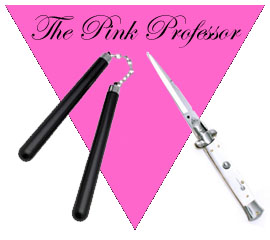 I'm seriously thanking my lucky stars tonight that my favorite person in the whole world, the Pink Professor, is safe and sound.

According to the way he described it, it was a close call all the way, and may very well have turned out badly. But thanks to his calmness and easy rapport with just about anyone, he came through it all right.

Listening to him describe it -- an outbreak of gang warfare at the Roadhog Roadhouse -- I was involuntarily slugging the air, because in this instance that was my response. Someone should pay for this melee! I was thinking. But he calmed me down, and I reached over and felt his arm, no blood; then his torso, no blood, then his leg, no blood. He came through it, and for that, once again, a tip of the hat to my lucky stars.

You can probably guess, this involved guys from out of town, as well as an unfortunate coincidence. One gang was coming this way from the south and one was coming from the north. Then it just so happened that they arrived at the Roadhouse to have beers and something to eat at the same time. You have to think, any little thing on their trip different would've changed everything. Like if the guys coming from the south had taken a few more bathroom breaks, they wouldn't have been there. Or if the guys coming from the north had stopped to stretch a couple more times, they wouldn't have been there.

As you know from everything else I've written about him, my professor friend has the Pink Professor role at this particular bikers bar. More and more bikers bars are going this way, getting a Pink Professor figure to help soften their otherwise harsh environment. But my friend didn't aspire to the role, he just naturally came to it when he visited there one night. After all was said and done, they knew they really needed him.

And perhaps they never needed him as much as they did tonight. Because these guys are legends in the bikers world, Manic Steve always with the jitters, always on the edge, always about to erupt or just cleaning up. I believe his gang could do better, but don't tell him I said that. And Rabid Ted, always frothing and foaming like a mad dog, slobbering, looking at you with those fearsome bloodshot eyes. They need to send the guy in for testing, but somehow they can't find a poison dart strong enough to put him down.

The Pink Professor gave me three guesses as to how the gang war started, and, he said, "The first two don't count." Naturally, I guessed a woman. These guys and their possessiveness! These guys and their testosterone! They need to get off those hogs long enough to relieve themselves if that's what it's come to! Maybe if Manic Steve and Rabid Ted had each gone behind a tree to personally satisfy themselves, they wouldn't be in town here pulling numchucks and switchblades over ... a woman.

As to how the Pink Professor was able to subdue these legends of the biker scene, it was simply a case of bravery and confidence on his part. That, along with his insights into human nature. You see, he knows that neither Ted nor Steve really wanted to fight, not in their hearts. But no one from their gang was going to stop them. And the locals here, actually they'd like to see a fight, so they wouldn't stop them. And if someone would've called the cops, they would've fought for sure, just out of pride.

Anyway, blades were drawn -- each side had a few. Then the numchucks made their appearance -- each side was well equipped. Manic Steve stepped forward, nothing but jitters and manic bluster. Then Rabid Ted made a step toward him, wiping the froth from his mouth, and letting out a howl for effect. Some little rat piped up, "Get 'em boss," and they moved in closer. It was about to come to a head, when the Pink Professor -- gotta love him -- stepped in: "Boys, boys... Yes, I'm calling you boys, because that's what you're acting like." He can be such a scold!

Then he turned the situation into something "totally unnecessary" for "two legends like you!" He explained that both of them were like the great warriors of old -- Charlemagne, Alexander, General Westmoreland, Eddie Slovik -- and they didn't have anything left to prove. And as for the woman, good grief, he said, both of them could have any woman he wanted, you know, within limits, someone from the pool of easy biker chicks -- between you and me, someone not worth having.

The Pink Professor's manner was so matter of fact, so convinced and convincing, as he generally is, that the whole thing was defused before it even had a chance to rage out of control. He has a way of making peace so appealing! He complimented them both profusely, then brought them together as great men together in common cause. Ted's froth dried up for the night and Steve bought him a beer, Steve, whose hands suddenly weren't shaking!
Posted by dbkundalini at 9:34 PM