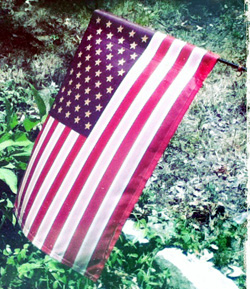 To me, one of the odd things we have to do is stand up at various times, to honor something.

It's not precisely odd, because it's hoary convention, and there's no real reason to even be thinking of it unless you just happen to think of such things.

We have the bodies we have, a butt to sit on and two legs to stand on. And somehow the idea took root, at least where I live, that standing on your legs gives more honor than sitting on your butt. Of course there's no real reason why that should be so, and maybe it's just the opposite somewhere else. Like in countries where they belch to show their appreciation for a meal.

The flag is the recipient of a lot of social honor like standing, holding your hand on your heart, etc. But there's not an entirely consistent doctrine to it. Social conformity and common sense born in habit gives most of your cues.

I'm using the community parade as my example. If there was a flag in an unmanned vehicle coming down the street and you were the only person there, speaking for myself, I probably wouldn't stand up. Because, really, what's the use? The flag itself doesn't care. And the only difference it makes to me is the energy expended for no real purpose, except maybe a second of exercise.

But the flag definitely has a social element to it. We're part of a country, we are generally like-minded, having gone to the same schools and heard the same things. Mix it in with some holidays being patriotic, like July 4, and the presence of veterans, and the lessons speak to us, Stand up! Along with social conformity. If you're not a Jehovah's Witness and everyone else is standing up, unless you're in a wheelchair, you better stand up. I'd hate to be a Jehovah's Witness, if not for all the other good reasons, then for that one alone.

Some churches have everyone stand for the reading of the Gospel lesson. This is one that makes even less sense to me. At least the flag is an overall symbol for a nation, a people. The Gospel just happens to be one part of the Bible. Doctrinally, I've never heard it said that the Gospels are preeminent as scripture. To be even remotely consistent, you ought to be standing for any Bible verse.

But the Gospels have a certain prominence, they often come right before the sermon, and that must be part of it. Also, they're the first thing in the New Testament. Two, they're the closest thing to biographies of Jesus. And, three, they have the key verses every kid going to church needed to memorize, like John 3:16.

As part of the Bible, though, even though they quote Jesus extensively, they're not so head and shoulders above the other books. You could make a good argument that the letters of Paul honor Christ in a more transcendent way overall, and if we're going to stand for anything, those would be good candidates.

But I'd back up and ask how does standing for a particular section of the Bible give more honor to it? Aside from the point that you could make that you're giving short shrift to the rest of it. Why is me on my feet any more honoring than me on my butt? And, as to consistency again, why aren't we all standing every time the minister or liturgist quotes from the Gospels? Why is it that the formalized reading of consecutive verses from these particular four books demands standing, but the incidental reading or quoting doesn't?

The real thing that shows it's arbitrary is that every church has its own custom. I've never seen any consistency on this, but with the flags it's a general custom for the whole country.

Of course I do it, the standing. What are you going to do, sit and look like a jerk? It's better than when I was a kid and you had to stand for the always incredibly long pastoral prayer. My biggest memory of those days is the sight of my white knuckles clutching the pew in front of me, and shifting foot to foot.

We ought to get together and do something like performance art on this. Like standing at obviously weird times, every time a bus goes by, or someone in blue jeans walks by.
Posted by dbkundalini at 5:10 PM