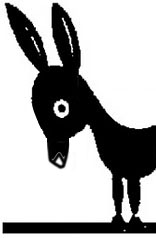 I was listening to the song, "Me and My Mule" by Champion Jack Dupree today, an odd coincidence since a couple days ago I just wrote my post, "Sex With A Mule."  I don't know if I'm going to live that down. I lost several Twitter followers, probably because of my promos:

Sex with a mule? If it kicks, you end up with a hoof print the size of a pie on your face.

There is no sex with a mule in my "Sex With A Mule." It's just a guy makes an embarrassing verbal blunder.

It's just an embarrassing verbal blunder, something about sex and mules.

Last call for sex with the mule. All aboard!

I couldn't get 20 people to look at this. They see "Sex with a Mule" and it scares them off. Why?

See how frantic I was getting there at the end, saying it was just about an "embarrassing verbal blunder," then even questioning my readers, 'Why are you all so scared of "Sex with a Mule."'

Anyway, getting back to Champion Jack Dupree, all that was just a coincidence, really having nothing to do with Dupree and his song. I'm sure Champion Jack basically kept things on the up and up when it came to his mules, and certainly for the most part there wouldn't have been any hanky panky. I mean, I wasn't actually there. And I know one thing can definitely lead to another, and any man can be driven to temptation, with the possible exception of the Pope.

But it's tough to believe any man would be that driven by the various primal instincts, like all the time. It surely wouldn't have happened very often, of that we can be sure, reasonably sure. There's clearly nothing much in the song of a sexual nature, although it's probably true that we wouldn't expect him to come right out and say he was getting it on with a mule. For that you'd have to read between the lines. We do know that he went from a warm bed to the mule in the barn, and that he and the mule then went skipping over the countryside.

I'm going to just quote the lyrics to the song so you can read it for yourself. It's him talking to music, not singing:


Yeah, it's 4 o'clock in the mornin',
and I got to go out here with this mule.
I ain't never seen nothin' like this before in my life,
this early in the morning.
I'll go on down to the barn and get him.
I don't wanna go but I will.

Well, let me open this door here.
C'mon out here, mule! [sounds of clomping]
Listen, standin' up there like you're half asleep.
C'mon, let's get out there in that field. [hee-hawing]
Ain't no use of you howling, I didn't howl when they woke ME up..
So you just as well shut up and come out here.

C'mon cross this bridge here.
This bridge is only big enough for me and you.
C'mon. You know I wouldn't go out here this mornin',
with that woman I love, she got long curly hair hangin' down her back.
But I wished it was on her head, yeah.

Let me see that she put our lunch in here.
Yeah, she put my lunch in here and some oats in here for the mule,
she mustn't think I wasn't comin' back till 12 o'clock.

Oh-oh, it's done started rainin' now.
Let's go on back now.
I'm glad of that.
Come on back cross this bridge.
It's funny all them window shade's down.
This time of day everybody's due to be up.
C'mon, let's go on in.
Yeah, and what I hope, I hope it rain again tomorrow.

Pretty nice song, huh? I hear this song, and I read the lyrics, and at first I don't see a problem. Where's the problem? To me, it all sounds quite innocent. There's no mention of any hanky panky. In fact, it's clear that he's taking the mule out to work in a field, and he'd rather not be up at 4 in the morning.

But he doesn't have that much good to say about the woman he supposedly loves. She has hair down her back and he wishes it was on her head! Maybe the mule looked better to him, since they're supposed to have hair down their backs. Note, he doesn't say anything bad about the mule's appearance, only his woman's. Not a good sign.

What I can't figure out about the song is why all the window shades are down at his place, even though everyone's due to be up at that time. To me, this might be where the hanky panky is. The woman has some other guy over, the shades are pulled down, she's not expecting Man and Mule back till late, that's why she packed a lunch for both. Maybe there's some alienation of affections going on, like he hasn't been giving her the proper attention. Or she's jealous about something that's been going on with him.

I'm going to go with this hanky panky angle. When he gets in the house and finds the woman in the sack with another man (there's no reference to any other beast), he's going to be mad. It'd be like a kick to the head. And there's no telling what he might do, especially if he has to stay the night in the barn. If he's not careful, there might be another kick to the head. Hoof prints the size of a pie.

UPDATE: Please note the strange verse about the lunch. The woman fixed him a lunch and put some oats in the sack for the mule. Meaning Dupree is feeling his oats in the sack, the "his" in this case being the mule's!
Posted by dbkundalini at 7:26 PM