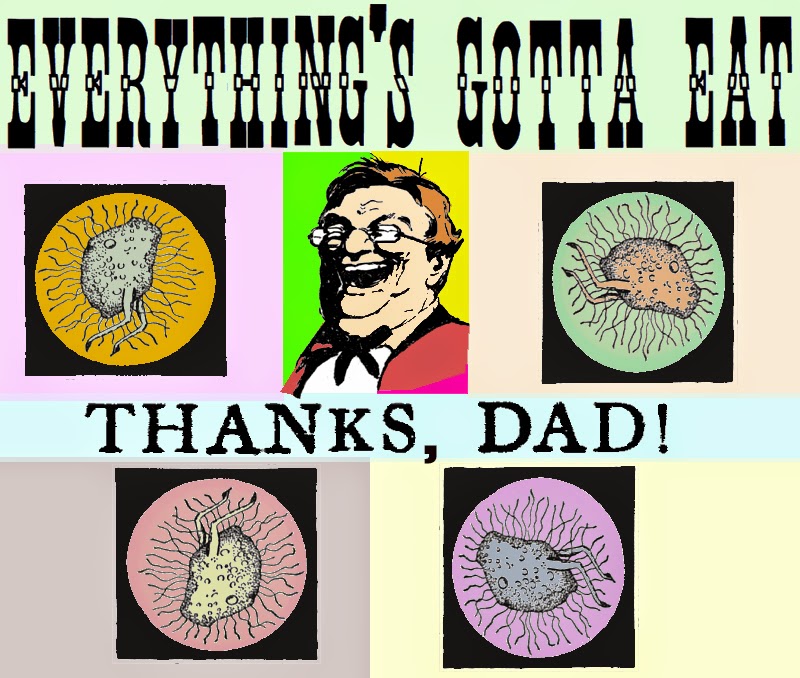 I've been accused of being heartless and cruel, and even rooting for people's suffering and evil, simply because of my realistic recognition that everything's gotta eat. This isn't something I came up with myself, but it's a teaching passed on to me by my dad, who got it from his dad, etc., probably. I haven't actually traced it back multiple generations. But it has nothing to do with rooting for suffering...

My dad, every time we had a complaint about something -- mice droppings in the cupboard, coons at the campsite -- would say, "Everything's gotta eat." Which, he pointed out, was something we depended on when we needed it, and therefore should appreciate. Which is true. If we want to catch a mouse in a trap we take advantage of the fact that it has to eat. And the same for coons. And fish. Imagine going to fish and not wanting fish to eat! You'd have to catch them in a net. And they'd be bone skinny, since they didn't eat.

Like I said, this is truth and it's realistic. If people suffer because something's eating them, they (we, I) need to be more accepting of how things are. If we can eat the source of the problem, or find something else to eat it, that's the same thing, but in a curative way. So we have medicine/radiation to eat it, in a sense. For some things you can get leeches, to get in there and go to town.

I've also been called fatalistic when it comes to this teaching about eating, but really I'm not. Again, it's realism, not that you have to accept it. Just like in another saying, "Eat or be eaten." If you're being eaten by something, in my opinion -- and I'm not expecting contradiction on this -- you have the prerogative and instinct to eat it back. May he with the best appetite and chompers win!

We as men have it in our arsenal to co-opt the eating talents of other agents. Like I said above, medicine, leeches. Or doctors. Doctors are just as good as leeches, if not better. Both bring their natural talents to the task, but doctors, because of their human minds and in-depth training, have additional talents. If it's a job for a leech, I'll go with a leech. If it's a job for a doctor -- and sometimes the doctor has to make this judgment for me -- I'll go with the doctor. In my experience, thinking back, I haven't used leeches as much as I might have.

OK, friends, before you criticize me for my stance on cancer, just remember, I too have suffered this scourge. Yes, I call it a scourge, since it killed my father, my mother, and other relatives, no doubt, many whom I haven't even known. It will probably get me, eventually. But if it does, I will maintain the same truth that I live by today: Everything's gotta eat. If the thing exists and perpetuates itself by eating, then to hope (or deny it) is folly.

When it comes to cancer, there are certain proactive things we can do, at least for a while, to keep ourselves from being eaten. Like don't smoke, don't chew, and don't go with girls who do. That might work. Everyday there's something else being brought forth as another cause of cancer. The best thing you can do, one imagines, is lock yourself in a room and do nothing. Except letting yourself out at certain times of the day to exercise and eat good meals and drink water.

Please, then, the next time you see cancer eating you or someone you know and love, remember, that's the way it is. Everything's gotta eat. If you can eat it back, by all means go for it; you have my blessing. If not, let this philosophical truth be your guiding light and, I might say, your comfort.
Posted by dbkundalini at 1:03 PM