I'm More Than My Squarish Body 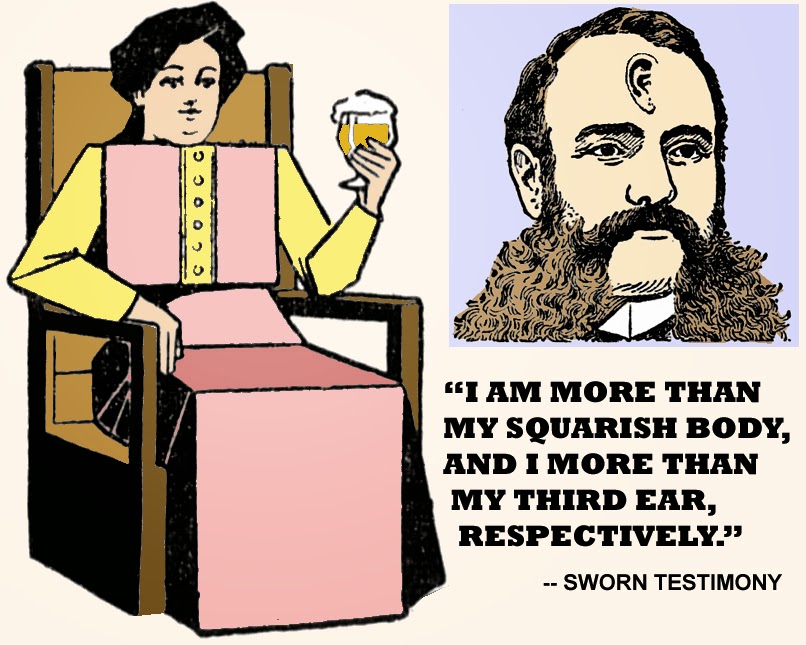 Jane is often invited to visit groups and give talks at meetings. Most people are interested in her squarish body and features. That's all understandable enough, of course, since who isn't curious about anyone with something immediately different about them? But she also wants all of us to realize that she's more than her squarish body. She is not a zoological specimen, pinned to a black mat under glass, only to be labeled, "Squarish."

In regard to the differences people have -- when I heard her talk before a church group -- she said she'd recently had the opportunity to meet a guy with three ears. His two ears are naturally in the ordinary places, but, due to a developmental issue, he has a third ear in the middle of his forehead. Not as great as eyes on the back of your head, but still distinctive. She says he gave a talk on himself and took questions, and was able to hear even the most soft-spoken folks in the back of the room.

"He saw me sitting there," she said, "with my squarish body, and it seemed like he was wondering about me. But probably because of his third ear, his own difference, he wasn't fast to blurt it out. I would say I was probably the most accepting person there of him and his third ear."

In the course of her talk, Jane said that way back in the old days, kids in school were merciless. But now with everyone grown up, she gets a more sympathetic reception. I nodded, because I had issues as a kid, too, like lots of kids, but now I'm Sympathy Personified. I wanted to give her an "Attagirl," but those kinds of extraneous comments are frowned upon by the group, which has to hear my comments every week but only has this one shot to hear a woman with a squarish body.

Anyway, she said she's given this same talk numerous times, in schools, for civic organizations, and even for coffee clubs and in prisons. She varies it -- which is all very understandable -- for the group hosting her. "School children do a lot of staring, but of all the people, they're the closest to true understanding. One little roundish boy told me, 'You were born squarish, I was born roundish!' I needed kids like that when I was a kid!"

When it came time for questions, I thought, Should I ask her something about her experience with a squarish body, or something more process-oriented? I actually know better, I swear, but I went with the process question and amazingly got a squarish body answer: "Do you like giving these talks?" I believe she picked up on what I was getting at: Why subject yourself to this kind of carnival, the whole thing highlighting, really, what is extraneous to your basic humanity, your shape?

She gave me the usual rigamarole mumbo-jumbo answer you might expect. She knows people are curious, etc., and she has nothing to be ashamed of... I'm looking like, "Yeah, but..." Then she got down to brass tacks, and I believe I perceived an underlying hatred of the whole process, when she said, "My biggest problem with it is I think of myself as normal, just another person. And since I'm more than a person with a squarish body, sometimes I wonder why I'm dwelling on that one thing. Does that make sense?" I nodded, and she declared, "I'm much more than my squarish body. Just like the other guy is more than his third ear."

I felt pretty good with her answer. Although I got a dirty look from our group's leader. Since I'd very clearly subverted the whole session, bringing forth from her a proud proclamation that she's more than her squarish body, the very reason we were sitting there listening to her. We dismissed in shame and rolled our roundish bodies home.
Posted by dbkundalini at 7:50 PM