I'm Possessed by The Dead Miner 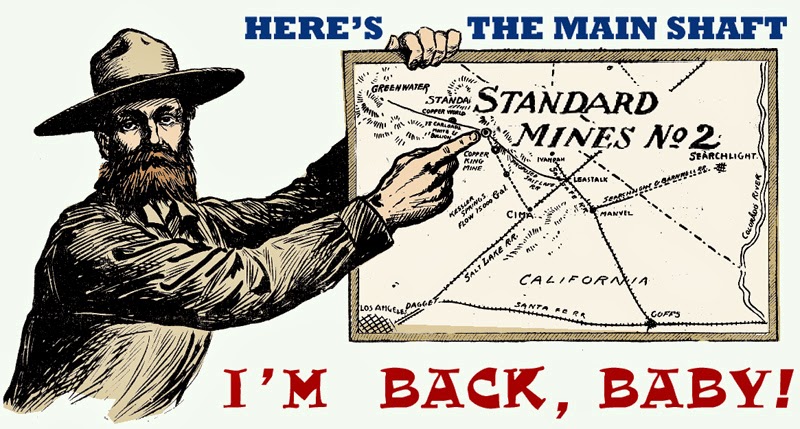 So many times over the years when I've heard people saying, "I'm a channel for such and such a dead guy," I've always said, "You're crazy!" Because I thought they were, the dead being dead and not coming back. But now I owe about a thousand people a huge apology.

Why the huge switch? Personal experience, of course. The only word for it is I was recently overcome by dead miners and possessed by one. There's a place south of here where mining used to be a big deal, the area's whole economy except for farming. Over the years, as these things always go, there were a number of miners killed, this or that shaft caving in on them, others getting struck in the head by falling timbers, and others breathing fumes fit for neither men nor canaries. I visited the place.

I haven't been a big believer in ghosts, although as a kid I was more susceptible to the idea; I used to be scared that particular departed spirits would appear, but never saw anything. Being grown up, till recently, I've strictly been a rational person, which I know now is just someone who's turned himself off to the full experience of the mysteries of existence. A few seconds with a microscope or telescope proves that the naked eye is blind to more truth than it sees.

Before going into the mine, I had a couple shots of whiskey, which I now believe lessened my resistance. Then somehow something terrible happened! Because since then my normal speaking voice has been replaced occasionally by a low, brusque, huskier voice. Rudely making suggestive remarks apparently reflecting a libido interrupted in its prime. "Hey, baby, I've got a rich vein for you right here!" It's happened in the grocery store, the park, downtown window-shopping, and even in church. They say I wasn't myself that day with the pastor's wife, suggesting, "The shaft is deep but nothing a real man can't handle."

The problem with dead miners -- the same as living miners -- is they're extremely lascivious. When alive, they were in the dark all the time. They did alpha male work, very repetitive, rhythmic, and regular. Then the mine fills up with musk and pheromones and hot desire. In short, it's a seething cauldron, very unhealthy, but hard to resist whether you're living or dead. If they find a host -- which is what happened to me -- there's no telling how far things might go.

At this point I'm reluctant to go out in public any more than I have to. My only "solution" till now has been to stay home and hope that my boring lifestyle would encourage the spirit to leave. But he still pops up in annoying ways, and seems to be extremely interested in beer commercials. Which have come a long way since the days of hunting cabins, cartoon bears, and sky blue waters. Now they're at pool parties, with sexy women in ragged cutoff shorts riding up the butt and the bottom of their pockets hanging down. You don't have to be a dead miner to stand up and take notice. And without fail, he says something, "Eureka! I've struck pure gold!" If he takes me to stake a claim, I'll be in trouble.

How I'm finally going to rid myself of this nuisance, the Dead Miner, I don't know. But I've got some ideas. I think my best hope will be to lure him back into the mine. To accomplish that, I could put a laptop computer about 30 feet in the entryway, run a slideshow of the worst content Tumblr has to offer, while blaring a lot of "Come hither-type" MP3 files to lure him in. Then once I felt the sensation of his departure, and sense that he's in -- perhaps signaled by a muffling of the laptop as he takes possession -- I'd blow the place shut with a thousand sticks of dynamite. It just might work!

Finally, with the Dead Miner gone, with God as my witness, I'll be able to strictly limit the rude remarks I make to those of my own.
Posted by dbkundalini at 8:03 PM