The Teacher Who Meant to Say 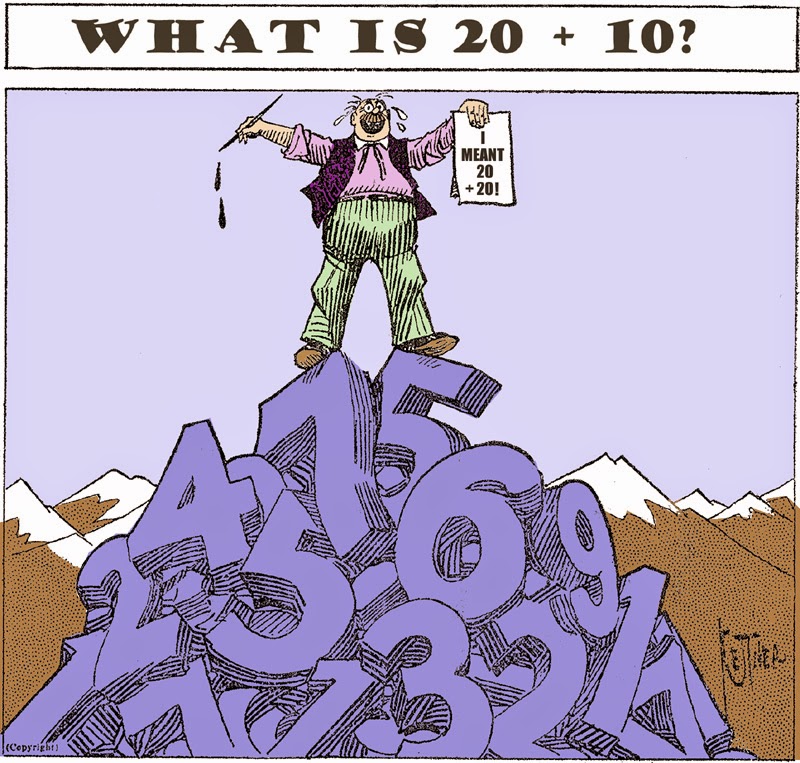 The whole class took the test and it was a total wipe out. Everyone failed, because each problem was different than what the teacher meant to put. For example, on the test he had "20 + 10," but he meant to put 20 + 20." So none of the tests matched up with his answer key.

After a while, as you might guess, almost nobody wanted to be in that class. To them, being absent-minded (or devious) is apparently the unforgivable sin. But a few hardy souls were man enough to take it, which included my dad, some other guys, and also some girls.

One generation passed on and another came, all the while the numbers going up and down. The lore of this teacher was passed from father to son, mother to daughter, with him keeping things confused enough that the school didn't dare fire him. The pattern of it went on. Which, if you think of it, it's a good way to learn math. Because your first answer is never right you learn twice as much.

There was a kid, though, who sometimes got it wrong on purpose because he was trying to get it right by guessing. By the way, that kid was me. I worked with some of the info my dad gave me, and I swore the teacher would not be a match for me. I was able to keep my vow only somewhat, because, obviously, he could always claim that he meant a different number.

Here's an example of me guessing. He says the problem is 20 + 30. Everyone else assumes the answer would have to be 50, but I thought of the stories, so I figure he meant to say 20 + 20, so my answer of 40 is right. He's amazed when one kid gets it. Now, though, he has my number and wants to make life tough for me. So he says the problem is 30 x 2. I can go one of several ways, I can increase or decrease each number, significantly changing the answer. But if say the answer is 90, assuming he meant 30 x 3, there's nothing to prevent him from saying he meant 30 x 4.

The way I eventually turned it around on him was to claim that I also meant something different than what I said. So if I said 90 and he said he meant 30 x 4, I said I meant 120. Like that. Or when I figured  he was getting totally wise to this, I prepared cards with all the various numbers, giving me the ability to pull out whatever card matching up with whatever he eventually meant.

We went at it like that for a couple semesters. Him riding my ass like a rodeo cowboy and me thwarting his every move like a rodeo clown. One last thing, it was getting extremely dicey for me -- with him ultimately holding most of the leverage -- leading me to petition the school to force him to teach like this: 1) Students' choice of problems; and, 2) Printed flashcards. That effectively defanged him until the semester ran out and I ended up with a B.

In later years, though, I heard that the school board rescinded their revisions in the curriculum, letting the teacher return to his old tricks. He had complained to them that 99% of his students were failing, so of course they immediately voted to rescind the rule. When in truth he meant to say 99% were passing.
Posted by dbkundalini at 6:59 PM