Mt. Olympus and the Pits of El Cid 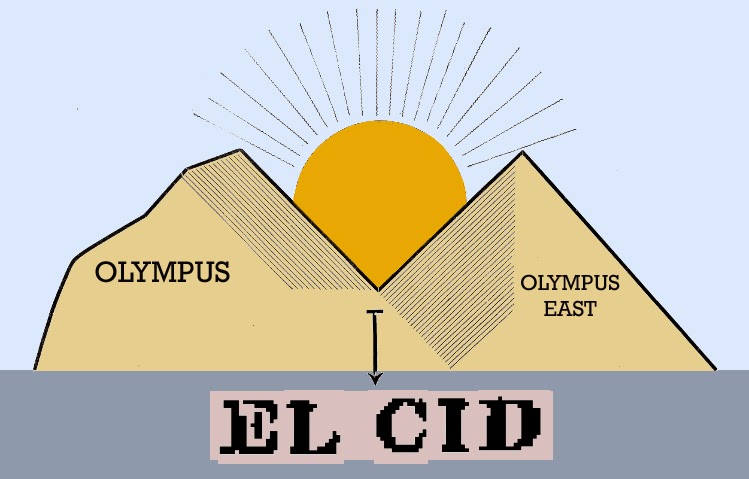 "If anything was ever said wrong in this lifetime, that was surely it. And now, with my boldness, with my mistake, I have been hurled from the heights of Mount Olympus, all the way to the gloomy depths of El Cid." -- From my morning meditation, thinking of a recent (massive) failure in speech.

Here's a teaching I've kept in reserve, hoping that one day my readers would show them worthy of receiving it. My hopes have long been disappointed, as I suspected would happen, but I have a terrific sense that the time has come anyway. It currently applies to me.

I want to teach a little bit about the difference between Mount Olympus (good) and El Cid (bad), as these opposite concepts/locales relate to the things we say, our speech. Olympus being good, of course that's what we strive for. El Cid being evil, that's what we so often settle for, a big mistake.

But, you say, historically El Cid is supposed to be a beautiful place, a place of goodness. Not the way I see it, Cid being related to sin or, more immediately, Tom Sawyer's brother Syd, a true snake in Eden.

Was it something I cid? Said or did? Certainly. I've cid plenty, and you can't take back what you cid. The tongue is a world of fire, of evil. Rooting itself as it does in the rottenest part of your soul. What makes a soul -- the highest expression of the person -- crash and burn faster and meaner than that? As long as I'm secure in one place, not stirring, uttering not a peep, I'm OK. But where there's movement there's trouble. And with movement comes expression, verbal blather, verbal garbage, the whole dump truck of written or spoken vileness.

The only antidote -- or solution -- is to remain in one place, be physically still, and keep your fool mouth shut. Am I right? That's what they say in meditation: You want to sit still and focus on one thing, that hopefully becomes no thing, so that you're again in the non-dual realm of Mount Olympus, i.e., the highest place, heaven.

For many of us this is hard to maintain. It's certainly been tough for me. Whereas I might sit there silently -- I'm thinking of myself in a group now -- at the last minute I open my mouth and all is lost. The Olympus investment I made is suddenly sunk by the junk bonds of El Cid. It's happened so many times it's not funny.

And I know where it's rooted, those stinking college courses where part of your grade is dependent on participation. You sit there silently all semester, then realize you're going to flunk if you don't speak up by the last session. By now -- and this is straight out of our group dynamics experience -- the groove of the group is deeply chiseled, the pecking order of talkers being long established. The fact that you're suddenly blurting something out, and clearly to meet the participation requirement even if it's by the skin of your teeth, makes you a shame in their eyes. They are in Olympus, but you are hopelessly mired in El Cid. Same old story.

I hasten to clarify, however, that Mount Olympus, despite what I just said, is a thoroughly positive thing, the very opposite of El Cid. On Olympus the gods are assembled in one place, the correlate of being alone with your thoughts. In the wastleland known as El Cid, knowing that you've broken the silence, and the filth hole on your face has spewed forth its muck and mire, that which is most despicable in the depths, you're in the depths.

You can tell -- I hope you grasp this -- that to be an extrovert is to constantly fail, to sink as it were in the quicksand of El Cid. No one wants to be around you. Everyone wishes you'd shut up. But to be an introvert -- like cleanliness -- is next to godliness. Clearly the reason is that with silence you're on Olympus (or closer), although, as is well known, you can still spoil it and once again fall to El Cid.

With my mind, then, I honor Mount Olympus, but with my mouth El Cid. How may I be delivered from such a fate? Thanks to the gods of Mount Olympus, my natural homeland is not El Cid! My daily prayer -- join me in this prayer now -- is for Olympus to keep me far from El Cid, in my spirit and daily life. May it be true for all of us! Although I know it won't be.

Posted by dbkundalini at 1:11 PM