Eating Steak, The Energy I Get 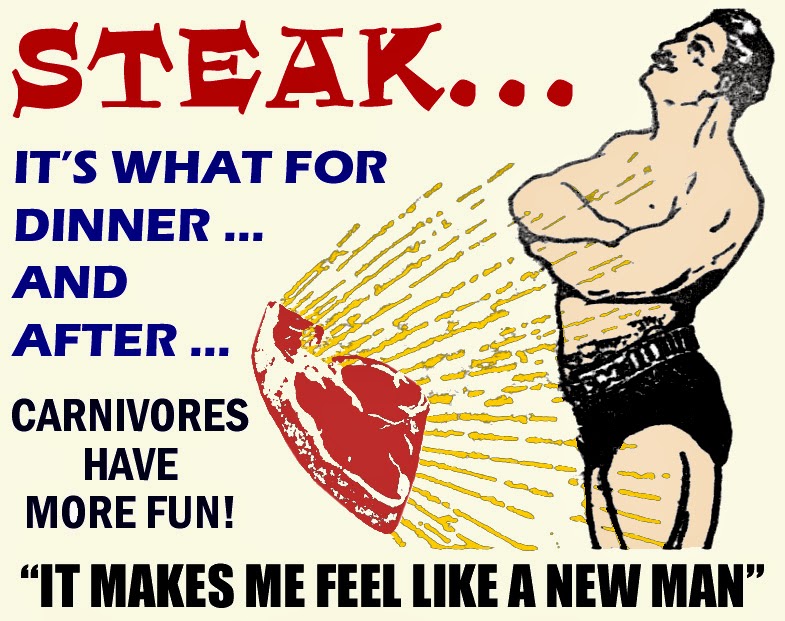 I strained to keep my eyes open. I was seriously so tired and weak I could've just dropped right there. This is horrible, I told myself, fighting to keep my vigor, alertness, and faculties. All because I was eating a cold salad ... waiting, waiting, wasting precious minutes till my steak would finally be done...

This is my oldest problem, becoming extremely lethargic while eating, unless it's steak. Then I feel the energy of Life Itself race through my being, giving me potency like a new man. I believe it's somehow related to the original energy of the original bull, the father of cattle.

Then at last it came, a big old perfectly cooked Kansas City Strip. I looked at it hungrily, feeling my potency remount as on angel wings, my hand quivering as I reached for the A1 and slathered that beautiful piece of meat with the sauce. The good stuff.

I dug in, tentatively, eating the first bite, and that was good enough by itself to be a prisoner's last meal. Speaking of angels, they rejoiced over the reddish middle. I was able to successfully add a couple of great stanzas to Handel's Messiah that they'll be singing at community sings this Christmas. Though an old man, I felt my oats again like a spry 14-year-old.

I seriously looked at the waitress, and she at me. I felt my cheeks flush, both from the perfect steak and the closeness we shared, and it was a contest to see which of us would ultimately have the willpower to pull away first. Which got much harder the closer we came to totally losing it, inch by inch. I could feel her hot breath, and surely she could feel mine; at that moment, when it was virtually too late, I pulled back and asked for another Coke.

I love a steak like this, although they make me go wild. If you ever want to take advantage of me, steak's the way to do it. Perfectly formed, perfectly cooked, nicely colored, a certain thickness, gnarly looking but still neat, just like the one she gave me.  The appearance alone would've technically been enough for me to lose it. I forget myself fast. Day to day I have terrific willpower, but with steak something triggers in my brain, and I'm in my danger zone. The steak's on the plate, the plate's in her hand, and what a beautiful hand, etc.

It's just the opposite with salad. I'm not a salad guy. A salad's cold and leaves me cold and lethargic. When it comes to salad I want it small, if at all, and the one I had was big. That meant I'd never be able to eat it. Salad's boring. And yet I hate to see anything go to waste, so it about wore me out. She asked me how the salad was and I said, "Boring," which made her perk up. "Good God, what am I dealing with?" I imagined her asking. Is this Undercover Boss? She didn't know if she was in for a scholarship or the chewing out of her life.

After a while, then, it became obvious I wasn't Undercover Boss, because I returned to the steak with my eyes rolled back in my head. I'm only halfway through and about to have kittens. I want it to go on and on. So I'm taking smaller bites and savoring them more and more. With the savoring, it's triggering key enzymes in my brain and my many glands. My full strength returns. My eyes are getting that Valentino look. In my mind's eye, she and I are working on it from opposite ends, with Valentino and Valentinette about to meet in the middle. It's so totally hot.

She's off, though, quickly, helping other customers. I'm only encouraged because she's checking on me multiple times, and the others at my table, who know we're clicking and yet how impossible it'll be for us to get together. She tells me she lives in the country, and I start thinking two things: 1) Country, such a vast term; and, 2) Animals live in the country. Crazy, natural animals going at it half the night, then curled up on a lazy morning by the stream.

I'm looking at the remains of my salad and the weakness returns; I'm about to doze off. I'm wishing I could crash. Forget the meal, let me sleep, perchance to dream and drift into fantasy land. The Coke's a Coke to die for, but I'm dying. And I have access to all the hot buns I might want, but I'm exhausted. Everything's a waste, except for the remainder of the steak, that beautiful steak! My strength returns.

This late in the meal, is it still as good as it was? Yes, the last bit is as good as the first. You'd think the spell would wear off, but I'm loving it. Just to key me up more, I put salt and pepper on the last bit. Then I slice it in thirds and dip it straight in the A1. It's dripping wet, the A1 soon rolling down my chin.

She comes around to get my debit card and sees me looking up at her, the A1 glistening, adding to the sensuous ambiance already in the allure of my burning eyes. With the very last piece of steak, I can easily picture us mouth-clamped to each of its little ends. "I'm working my way back to you, babe, with a burning love inside!" But she suddenly moves back, as if torn. A bus has arrived, she says, and they're bringing in 48 senior citizens, most of whom won't be able to stand in the lobby and wait. Meaning the rest of us have to clear out and let the bastards in.

But oh baby. That was a steak! The steak that brought us ... so very close, that close to losing it.
Posted by dbkundalini at 6:25 PM

Before beef prices skyrocketed, quality steaks were on sale cheap, so I filled a 10 CU Freezer full of Rib Eye Steaks at 5.99 a lb. Most were 1-2 lb each! I practically lived off of them, cooked blue or very rare, almost entirely dark red. As soon as I would eat one, I would burst with energy. I call it "steak energy". Butter is another food that does that for me. Steak is my favorite food. Glad to read this.