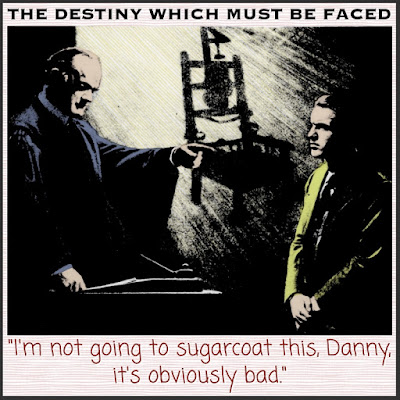 Knowing Your Destiny
Part 11 of 30

I’m so glad I’m not this guy, but instead have kept my nose fairly clean and record clear. But not Danny, so disappointing to the old judge or parole officer who befriended him before he did anything unforgivable. (Of course everything is forgivable, but they still put you to death if it’s extremely bad. “I forgive you, now get your rearend in the gas chamber.” Or electric chair, as here, if you don't like gas.

I probably should address the whole issue of capital punishment, to the extent that any of my opinions are interesting to anyone. The truth is, when you’re a social mover and shaker like me, everything’s of interest. Just like I had to weigh in on some other issues one day, including my opinion on women driving. Of course I grew up a long time ago when women driving was a subject that spurred a lot of debate. My opinion has evolved from a stern absolute prohibition to a more liberal outlook, being OK if she’s male-certified.

Anyway, my opinion of capital punishment has similarities and some differences. If I hear someone speak on the subject, against it, I’m against it. But every time something heinous happens -- and you know the types of crimes horrible people commit -- I’m for it. It doesn’t really bother me if people are locked up forever instead of capital punishment. But if they’re executed, it’s not like I knew them in the first place. I have problems of my own to worry about.

Maybe Destiny needs to have its say too. Destiny’s opinion is probably, "Whatever happens I did it," although I have a hard time with that at least on the surface. Because I certainly feel like we bear some responsibility for the good and the bad we do. If Destiny does it all, nothing I do good is really anything and nothing bad. I frankly don’t do much of the bad, barely anything intentionally, so it really could be in the crazy hands of Destiny. The good I do, though, it’s mostly just an absence of doing bad.

I live a normal life, not stepping on people, looking out for people, trying to do good, trying not to do anything I’d be blamed for. But if Destiny has a part in it all, that frees me up. If I caused an accident, I’d just hope Destiny is fully insured. But really where is Destiny when you need it? It evaporates like a puff of smoke, leaving the rest of society holding the bag.

Usually when the implements of capital punishment make a physical appearance, everything is squared away and in place for the penalty to happen. If I were guilty and up for capital punishment, I think I’d be stoic about it. Think of the shots you got before every school year. It only hurt a few seconds, whereas life in prison is one crappy thing after another for decades. Definitely worse than dying.
Posted by dbkundalini at 6:00 AM