Destiny Out of Whack 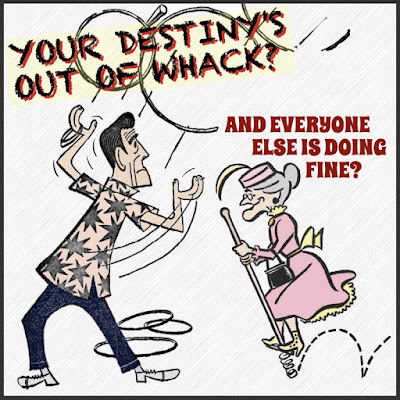 Knowing Your Destiny
Part 18 of 30

It’s the same old story all through our lives, and a sad one. We think we’re doing OK compared to everyone else, then it turns out everyone’s so far ahead of us it’s ridiculous. And I realize we shouldn't ever compare ourselves with others -- who supposedly have troubles of their own -- but it’s hard to do when it's like you're slipping away, perhaps going down the old drainpipe. What's going on?

Destiny could very well have something to do with that. If you’ve ever said, “Why me? Why me all the time? then you know what I’m talking about. And the more you say it, 10-12 times a day or more, the more likely you're really resonating with the idea that you’ve slipped so far down the tube that you could disappear from sight. While the average guy -- apparently no better than anyone -- breezes by, setting a new pace for even younger guys than himself.

I like to think Destiny isn’t such a thing, and that I’m as good as anyone, just to use me for an example. I know a lot of people sense the same thing, the slippage they’ve noticed in the “race of life.” Maybe you even got a head-start, were born on 2nd base as the phrase goes, but in recent years, days, and even hours, you’ve noticed that you’re not as far ahead as you thought. Instead you’re bummed out, everyone else is out of sight and you’re lagging, then dragging.

Well, I've heard the more you worry about it, the worse it gets. Especially if you’ve been recognized by others -- more than just your own thoughts -- as a real go-getter, setting the pace, never lagging, never dragging. Everyone can have a hard day, but then it might become a few in a row, then a nasty couple months, then a year where up is down, until your life is known as a giant goose egg, a zilch, a nothing, the pits. At your most optimistic you're getting lemons.

Usually Destiny sets the pace and we follow, I believe that. But there can be times of lagging and dragging in a physical or perhaps greater way. The technical term for it is “out of whack” or "out of order" or "down for the count" or "in the crapper." Others are skating by or going at a comfortable pace or even leaps and bounds. And you wonder why. As I said, the reasons could be anything, all the way from secret sins of the flesh -- and I think you know what I mean, you devil -- to merely the natural wear and tear on your hold on Destiny.

It's easy to imagine that Destiny gives up the ghost like everything else, and so whatever reserves we have goes to some more deserving person. In the illustration, perhaps check out the old granny figure, so lithe and bouncy, it seems like she may have just now received a healthy dose of someone’s Destiny, and it'd be that of the lagging, dragging guy if I had to guess.
Posted by dbkundalini at 6:00 AM