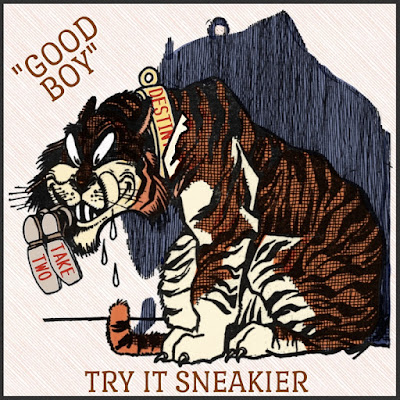 Knowing Your Destiny
Part 23 of 30

Among the basic rules of life -- and you could make lists everyday day -- are: Be vulnerable, but also wary. If you're too vulnerable your destiny could be to end. Wariness counters that. But too much wariness and you're overly skeptical of what you hear, making it hard to go forward. In short, lean on your innate self-knowledge but don't forget common sense. It goes a long way toward keeping your place, your freedom, even your dignity.

Dignity's at stake when a tiger's eating you. If you had a tiger swallow you, think how embarrassing that’d be, not to mention painful. Check out Glen’s shoes, and wonder how he could've let down his guard to such a foolhardy extent. He's been in trouble before. So I ask, How many times does this poor dude need rescued? Glen, if the sidewalk looks slick, show down. If the tiger looks hungry, offer him a TV dinner. And in the meantime lock the door, hide in the basement, do anything except allow yourself to get swallowed.

But it happened, and of course they had to call the ambulance guys, who worked gingerly with two endangered species, Glen and the tiger. And probably the tiger’s less endangered, since he's able to swallow you whole and pass you whole. The best Glen could hope for would be its peristalsis is slow, and whatever laxative they're able to give it (without messing up its metabolism) would speed his reappearance. Time is of the essence. Glen had to hope they could bypass the animal’s natural digestive juices.

My message today, brothers and sisters -- is that you must not become a victim of destiny. Are you with me? Destiny exists, this is true, but it leans more toward being an agent of good, not something meant to detract from your dignity as a human being, which is definitely what comes to pass when you are physically eaten and digested. Where’s the dignity in that? There's none!

What is so critical is the middle path. Yes, you want to be all-in. But you must be all-in in a way that is wise, not foolish. Something that gives health to your members, not destruction. Something that fulfills your destiny, not ends it. Yes, my beloved, every pursuit in life has stops along the way. You eat your own food, bite by bite. When people see you eat, for example, they don’t see the literal shape of a T-bone steak working its way past your throat. It's not clearly delineated as it goes down the gullet.

When it is in the stomach and then later the intestinal system, where digestion receives its crowning glory, no external observer is there to witness the T-bone steak in its original incarnation, non-chewed, unmarred, or whole. The thing is bitten into numerous pieces, awaiting the transformation, the alchemical change as it gives up its form and nature and is in part -- the nutrients -- absorbed into your system, while that which becomes eternal waste is expelled, finally cast out into the draught, the drain, the sewer, the cesspool.

Please, Glen, get a grip, before something worse happens.
Posted by dbkundalini at 6:00 AM