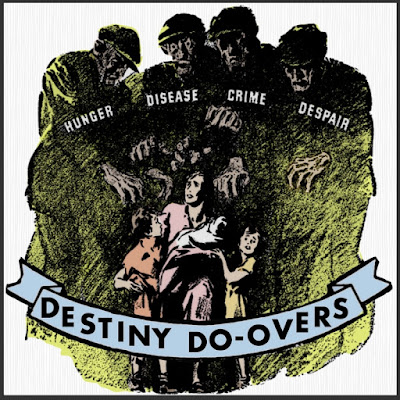 Knowing Your Destiny
Part 8 of 30

This is by far my least favorite side of the whole scheme of Destiny, karma, and what have you; it's total icky poo poo. I just hate the thought of anyone suffering, except of course, understandably, outright wholly impure evildoers. And I even wonder about them. Were their crimes -- maybe lying about me in 8th grade -- really that serious? There’s certainly worse things. Some so bad they’re defined and judged the same around the world, with only minor differences, as real downers. And if you get on that slide of existence, it’s all downhill, one heck of a ride to the bottom. And when you get there -- ouch! It’s bumpy -- the ride’s just started and you haven’t yet reached the bottom, but down, down, down you plummet, and even then you're still plumbing the shallower depths, let us say.

If it were up to me, I’d have an inert eternity or milder cleansing eon to get everything squared away. Then you’re good to go, and hopefully -- as Deity I always keep my fingers crossed -- you’ll learn your lessons from the past and reenter the world with all the virtue befitting some of my older aunts. Who if they ever did a bad thing in their whole life, it was merely too much focus on their virtue, which was great and clearly a thing to be proud of. But that's also a slippery slope, which I’m glad I’ve never succumbed to, because that would be very very bad. Strictly off limits, a "don’t do it" kind of thing. Plus, don’t even think of it, or someone up-there or down-there or out-there is gonna get you...

In this scheme of things -- see the graphic -- those who suffer worst are the ones with the greater weight of karma. It's a point system, where for every good thing you do you get a plus point, and the opposite for the bad. Occasionally you hit one of the lesser jackpots -- sins of omission or commission -- and the bells ring and a more considerable payout gathers in the tray. “Look! 400 years of good! Let it ride!” Or “Damn! 200 years of flickering flames, darn the luck! Oh well, may as well get it over with.” Followed by a plunge into the dark depths and apparently rotting to death on the banks of the Styx. Not exactly ambrosia.

OK, who do we have in this unpleasant rogue’s gallery of Destiny? Yes, the usual suspects, Hunger, Disease, Crime, and Despair, reaching their nasty hands out to those nearly in their grasp. It’s all sad, I know, but it could be any of us, if karma, as sketched out above, is any consolation. And usually it’s not. But the good news -- it’s great news! -- is that you’ll be out of all that at some point and on your way to a brand new Destiny. Let’s say it takes 10,000 years till your next incarnation. Suffer that relatively brief time and you’ll be back in the saddle, riding high, with huge optimistic hopes, a positive outlook. But it might be only 5,000 years, or even split that in half! A penalty, yes, but next to nothing compared to 10,000 years. Which itself is a drop in the bucket if you figure the 10,000 could've been 20.

My advice, always do your best and you won’t be so worried about it. Anything less than 100 years of suffering and you’ve got something good enough to be proud of, of course without actually being proud of it.
Posted by dbkundalini at 6:00 AM