Destiny 'Round The Clock 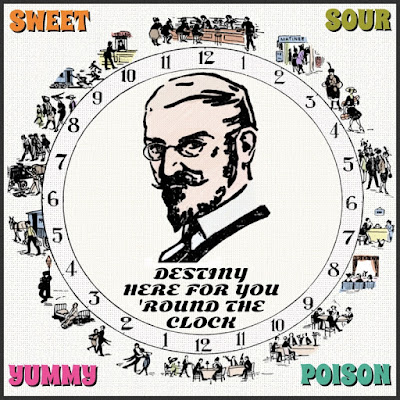 Knowing Your Destiny
Part 29 of 30

I hear people sometimes say how much they love to read biographies. Which to me, of all the things you can read, are the worst. “Like everyone else, I was born at a very early age. My parents were so and so. I went to school at the usual place. The pizza parlor in my hometown was known for one thing, always being out of sausage. How hard is it to stock the basic ingredients for pizza? If pizza's the one thing you do, either do it right or forget it. We might’ve been looking at a passive/aggressive thing from an on-and-off vegan wanna-be manager. Which if that’s your thing, do it proudly, with aplomb, but instead of making pizzas how about the salad business?"
There’s no room for surprises in biographies. To be true to their word, they have to drone on and on about the nitpicky daily grind, the boring ins and out of their family system, their various surmises about the neighbors’ affairs and who their (the neighbors’ friends) were, since they seemed to think of themselves as better than us even though obviously we're all in the same boat. And speaking of boats, my dad ran a bait shop for the fishermen who populated the nearby lake, well stocked, full of everything, hard to find lunkers as well as the common crappies just off the shore, barely in the water.

So when we start sketching out lives -- unless you were a rodeo cowboy and have a lot of dirt to dish -- it’s all the same verbiage, a waste of paper, ink, glue, time, and shelf-space. The whole thing tries my patience, probably the worst sin there is, about as bad as waiting for spaghetti to soften in boiling water. I mean, look, it’s a millimeter thick, how can boiling water scald you in a half a second but it still takes forever to soften even the tiniest pasta? This is the biography I want, sadistic pasta makers cackling with evil delight over the quandary: “Just let ‘em try and cook this. They’ll drop dead from old age and famine before they ever get their money’s worth!”

OK, where are we? Destiny is simultaneously everywhere. But to every person, Destiny is there “as if” its presence were for you alone. Day in, day out. Sometimes responding to your biography as it's in progress, and sometimes screwing it up royally because its presence is also with everyone else. Some things have to collide. You’re at the theater, it burns down. Or Lincoln's shot by someone in the projectionist’s booth. You’re at the malt-shop, at a restaurant, or you’re a farmer milking the cow because the malt-shop’s running low, or the restaurant. The situations are endless, but Destiny’s there in the whole mix, mixing it up, yes, but also keeping it straight.

Be careful what you do then. It might be exactly what you should do and that’s good. But it might be just the opposite, something that will mark or scar you for life, and that’s bad. Each of us has the same 24-hours-a-day. If I were you, I would stay close to home, because, say you’re out in society, anything can happen and always does.
Posted by dbkundalini at 6:00 AM