Money & The Skids of Destiny 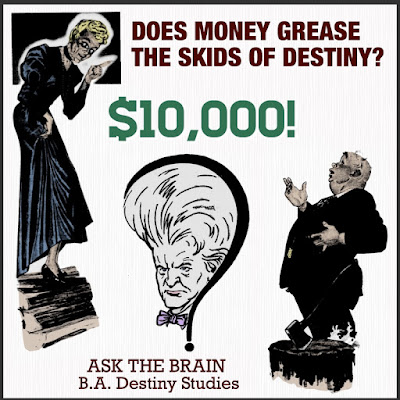 Knowing Your Destiny
Part 19 of 30

One of the hottest topics in Destiny studies is -- and it's a perennial -- “Does Money Grease the Skids of Destiny?” Of course the question's a real natural in a money-based society (mad, hungry, lusting, even loathing of money), as most of them are.

It’s a good question, because, after all, money greases the skids of everything else. I can barely go to the grocery store without money greasing the skids of me buying food, paper towels, and an occasional piece of candy. I get to the cash register with my sad baby blue eyes and twisted lips, begging without words for them to allow me to pass through without paying. But whether they don’t understand the quandary or merely pretend not to, it never works. I’m sure, though, with some of the kind checkout ladies, that if they were in charge of the store they’d be happy to let me through with virtually everything. Or maybe not.

I show up with my stuff, though, and it’s always the same, the ringing of the cash register, buzzes, beeps, all of them scanning my things through some sort of glass mounted on the counter and the cash register keeps track of what I owe. The only time I haven’t had to pay was in a roundabout way, the day I found $100. I asked 10 people sequentially if they’d lost $100 and they all said "Yes," so I figured everyone’s lying about it; if they can’t quote the serial number it’s mine. None could, so I got $100 worth of groceries that day for free.

That’d be a good entry in my study of Destiny. How Destiny happened to see me coming that day and greased the skids with $100, but has failed to see me coming a million other times. It's a mystery. I’m still working on it. My preliminary assumption is Destiny wants to help me once in a while -- once in a blue moon --  but it doesn’t want to help me to to the extent that I might ever take it for granted. I actually had the same thing happen as a kid, but back it was just one dollar. And from that moment on, every time I was in that store I checked the same place. Now the whole facility is torn down, I could go back and roughly find the same spot in the dirt. There might be a pot of gold waiting for me. But my faith isn’t enough to take me there, because now it’s hundreds of miles away.

To find $10,000 would be a great destiny. And of course $10,000 isn’t that much money these days. But if you find $10,000 you about have to turn it in. My first thought would be the bills are marked, they fell out of an armored car, they’re part of a heist, etc. And if you kept it -- which I suppose you could keep it for 20 years and it might be different -- you’d have a multitude of problems in the meantime, everything from fear of being caught to fear of someone stealing it from you.

Say worse came to worse, I would hope friends would appear out of the woodwork to help me. But if Destiny’s ever that kind, it'd be news to me.