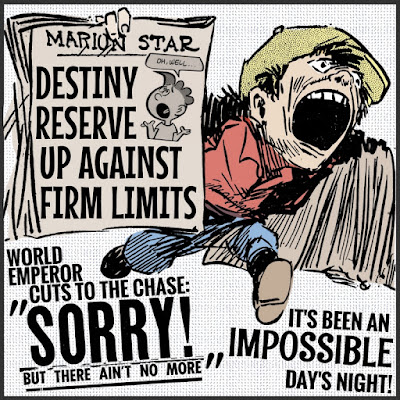 Knowing Your Destiny
Part 17 of 30

As I teach in one of my advanced lessons -- and I think I can hint at it without giving away the greatest secrets -- Life is so often like a giant wounded bear in the cave of the world, seemingly about to breathe its last, but then somehow it struggles and continues with labored breathing while barely hanging on. Destiny has similar problems.

Just the continuous problem of everyone’s individual destinies, trying to keep those in sync on a macro level, then with the necessary interplay with everything from microorganisms all the way up to space aliens, with their own problems (mostly tentacle cancer) even while threatening our complete obliteration, keeps Destiny jumping. You’d really think Life could be a little more secure, sort of the way it feels when we wake up refreshed after passing a pleasant night with good sleep. But what does morning bring, all too often? Well, they’re not selling newspapers with the latest triumphs of the Garden Club, that much is clear...

So we’re torn, our psyches ripped right up the middle, with the consequences of something. Fate? Destiny? Yes, but it's the sad truth that Aliens Have To Eat Too. If we get as good as we give -- and I was munching earlier on a candy bar that gave its life as a breakfast substitute for me, along with coffee beans once minding their own business on the vine -- we have to be prepared to accept that oblivion could be our next stop. That’s the macro level. Then the individual terror sets in. You’re hepped up, the next guy’s beside himself, screams lead to social jostling, then push comes to shove, and pretty soon we’re up against it, the limits we once considered so firm.

As a destiny counselor, you might think I live for this kind of chaos. And, yes, I’ll give you that much, it’s definitely good for business, but remember, I too have to live. And the more the problem is something merely suggested on the individual level for those willing to pay to hear how to tinker their destiny back into line, the better. But when it’s everyone going ballistic at the same time, that’s a two-pronged challenge, crazed masses of people in an apocalyptic nightmare running roughshod over the careful teachings of destiny counseling, and my eventual challenge of ever bringing sedation to enough people to restore an orderly clientele, who for all I know may have been herded over a cliff to their demise. On the one hand, yes, I can accept that was their destiny. But then what? Like aliens, I also have to eat.

If it ever happens that Destiny reserves are indeed up against firm limits, we'll have no choice but to look to the World Emperor -- Long May He Live -- and face our destiny. The way he cuts to the chase with bad news and leads us, calming the bitter turmoil of the masses and all dreadful consequences, so we shall face that destiny if it happens. Indeed, long may I live, too, and may those nightmares be delayed for the rest of my life. Amen?
Posted by dbkundalini at 6:00 AM