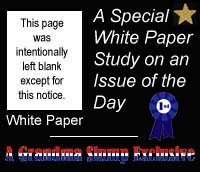 This links to an article describing how someone's 102-year-old grandma decided to vote for Obama. The someone is named mangelwurzel, which when I mention again will have a capital M, just so it'll look more like a person's name and less like a botched German dish.

All of the HER and ME pieces below are from Mangelwurzel's article. So anything politically incorrect is Mangelwurzel's grandmother and does not necessarily represent the views of this blog's management, including Grandma Slump herself, who, of course, swings Republican and so is generally very politically correct.

One other item. I won't be researching whether Mangelwurzel is a male or female. Grandma calls Mangelwurzel a "Sweetie," which doesn't seal the deal since I've heard a lot of that over the years myself, but I will call Mangelwurzel a she anytime it comes up.

HER: My God the world's turnin' upside down over here

ME: What do you think of Sarah Palin?

HER: I tell you I can't see her as the president, she should be home taking care of all those babies. My heavens to betsy, one's knocked up and the other's retarded

ME: (wincing) Well, then what do you think of Obama, Grandma?

HER: Ohhh, I don't rightly like the idea of a black man in the White House. I'm worried he might shove it down our throats, everywhere you look it'll be black this and black that

ME: Well, I know you come from a different era, Grandma, but times have changed. It's not about black or white, it's about the man and his policies and what he can do for America. I think we're getting beyond that now

HER: Well, you're probably right and anyway he's the only one who knows what the hell he's doing, we've got no choice

ME: Really? You mean that? What about McCain?

HER: I never liked him very much, I don't reckon he could manage himself out of a paper bag

ME: (laughing) I don't either!

HER: But you know, I'm not going to be around much longer, it's not my problem anymore

ME: What?!? You're still alive, ain't you? Are you registered to vote? I thought Dad was going to take you over to vote like always.

HER: Yeah but I don't like this whole electoral college, delegate thing where I don't feel like my vote counts, we should have one man, one vote, a popular vote

ME: Ok, I agree with you there and certainly my Democratic vote is like a drop in the ocean in rural Texas (I vote by absentee ballot) but every vote helps, regardless of which party

HER: I just feel like my vote doesn't count

ME: Grandma, I don't care who you vote for but would you please vote this year? For me?

HER: Alright, honey, for you I will, I'll go vote

HER: You want me to vote for that little black boy? (snarky voice)

ME: GRANDMA! I know he's not even half your age but he IS 47! Don't vote for him for my sake, you should vote for who you believe is the best candidate

HER: Well, out of what we've got, I don't see what other choice we have

HER: Probably my last time, you never know

ME: Nawwww, Grandma you'll be around for the next one

HER: I hope not! (laughing)

Grandma says, "My God the world's turnin' upside down over here." There must be something in the tone that implies this is a political statement and not just normal falling over, as Mangelwurzel replies, "What do you think of Sarah Palin?" From there on we're into the politics.

Grandma speaks with bluntness, using some interesting language, saying, "I tell you I can't see her as the president, she should be home taking care of all those babies. My heavens to betsy, one's knocked up and the other's retarded." Mangelwurzel rightly winces, because the phrase "Heavens to Betsy" is very outdated, even for centenarians. Then beyond that, Grandma is concerned that Obama is black, but maybe Mangelwurzel can explain to her that they still haven't found a cure for that, and that she should be compassionate toward the less fortunate.

Another tact -- not my personal favorite -- is what Mangelwurzel tries, explaining that "times have changed" and that America might be getting beyond racial distinctions. Grandma's in no mood for a discussion; I can tell that. My experience with Grandma Slump is that she doesn't agree this quickly unless she just wants you to go away so she can take a nap.

But Mangelwurzel takes her victory where she can get it and switches the subject to McCain. I like this, because if you leave Grandma to her own devices, at this point, the bugaboo on Obama being black will reemerge and she'll likely say something unpleasant. You know, maybe something about kinky hair, those hair bonnets they have to wear to keep the moisture in so the hair doesn't crack and fall into their food. That's the biggest reason white folks always hated soul food, the constant spitting out of dry hair. Anyway, we don't want Grandma to say anything embarrassing and stupid, or, frankly, racist, so let's move on...

The subject is McCain, and at this point Grandma and Mangelwhatever are both on the same page. Grandma says, with the keenest eye for intelligence and ignorance I believe I've ever seen in a doddering person of her years, "I never liked him very much, I don't reckon he could manage himself out of a paper bag." That is true. History records it -- which is no doubt where Grandma picked it up -- that John McCain spent 5½ years trapped in a paper bag.

Then Grandma turns morose, saying, "I'm not going to be around much longer, it's not my problem anymore." Mangel fights back tears and assures her that she has at least a 5% change of living until Nov. 4. For me, this is a place for a reassuring hug, as well as making sure her will is all in order. But what does Grandma do to compensate for her moment of weakness? Something I've never heard Grandma Slump do, that's for sure. She flips open a poli-sci textbook (her comment on the Electoral College)! My grandma can only be coaxed out of a stupor like that in two ways: 1) Tickle her under the chin; 2) Serve canned apricots.

But look at Mangel's punctuation: "ME: What?!?" She didn't respond with a gentle question. This was an excited response, then she mentions Dad, and Grandma is shocked back into sentience. I like that, verbal shock therapy, with a twist of guilt (i.e., remember you have a son who may appear to be fed up but still doesn't mind all that much doing things for you, so snap out of it!)

Grandma's response shows she may have once been a Social Studies teacher. To me it's so obvious that Grandma didn't really say this, "I don't like this whole electoral college, delegate thing where I don't feel like my vote counts, we should have one man, one vote, a popular vote." Mangel's lying! And yet, because it's so obviously a lie, it must be the truth, because no one would expect us to believe it unless it were true. So, yes, Mangelbaum's grandmother really said that.

Toward the end, they come to an agreement on the Electoral College, but still, Grandma must be coaxed into voting. "I just feel like my vote doesn't count," Grandma whines, perhaps sensing a serving of apricots and a good chin tickling in her immediate future. Then Mangel mangles it up by saying she doesn't "care" who Grandma votes for, but purdy-pwease, do it for wittle ole me. "Aw-wight, hunnybunch, for wittle old you I'll go vote..." Sickening drivel! Here's where my outrage comes from: The Bush administration is the most criminal administration in U.S. History. John McCain threatens to continue on the same path. Grandma needs to vote for the sake the country she presumably loves. But Mangel makes it into a personal thing, "For Me," and has the audacity to say she doesn't "care" who Grandma votes for! At this point I'm describing the brownshirts at the door, they're coming to get you, Grandma, they have ways of dealing with you! There's their ax! There's their sledgehammer! By now she's begging to vote for Obama.

Now, I know everyone will say, what about you? Haven't you said that Grandma Slump supports John McCain? And that she swings Republican? Yes. Those things are true. My only defense is this: I have no defense. But I may have a strategy. Let's just say when election day comes, maybe I "forget" where the voting station is, maybe I do. Or maybe I fill up the tank with gas, maybe the voting station is only a few miles away, maybe I drive around most of the morning looking for it, maybe I pull up next to an "unrelated building," and run in to do a "quick errand," maybe I refill the tank two or three more times as we're driving around between 7 a.m. and the time voting ends. I'm not saying any of that will happen, but if it did, there'd be no harm, no foul, because my own vote (which may or may not have happened during the "quick errand" at the "unrelated building") wouldn't be cancelled out by Grandma Slump's vote for McCain. So in that hypothetical it would be net one for Obama.

Back to Mangel's grandma. She says in a "snarky voice," "You want me to vote for that little black boy?" You know, I've always liked little black boys, like the ones dressed as servants, holding a ring to hook a horse to. The original black Cabbage Patch babies. And who can forget the story of Little Black Sambo? He's an overcomer; the tigers turn to butter. It's a great story.

Finally, in the end, Mangel guilt trips Grandma into making a commitment to Obama. "Don't vote for him FOR MY SAKE, you should vote for who YOU believe is the best candidate, hint hint." Grandma rightly says, "I don't see what other choice we have." Mangel is happy with "YOUR decision." Grandma gets sullen again, but invites a response of false hope, "Probably my last time, you never know." Then Mangel offers the false hope, "Nawwww, Grandma you'll be around for the next one." Here's where it gets treacly. Grandma says with a laugh, "I hope not!" If I'm Mangel, I'm sitting there thinking, OK, don't worry, you won't be!
Posted by dbkundalini at 7:14 AM