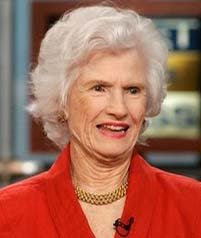 It was nice to see John McCain's mother, Roberta, at the convention tonight.

I don't really know what she's like -- if she likes to be tickled under the chin like Grandma Slump and to eat apricots -- but I can imagine, and I'll bet she does. It seems to be universal with ladies of her generation.

But maybe not. Sometimes we see an older gal like her -- and I say this in all respect, a grand looking dame -- and we forget she's not just an old lady, but the same kid she's always been. Only her body is older, something all of us will know for ourselves, if we're lucky. So there's no way to really generalize what they like. But I have my suspicions! Goochey, goochey, goo!

I've seen Mrs. McCain on a few shows, and it could be she's had a harder edge to her through life. For instance, she had some nasty things to say about Mitt Romney's religion (perfectly understandable from my point of view). Recently, I can't think of what it was, but she called something significant in the campaign "stupid." And she's been off the reservation a time or two in addition to those times. But everyone treats it as cute, which it is, but that also means they're going wink-wink, she's old and can't help it. Perhaps, but perhaps she knows exactly what she's saying, because she does seem pretty clear-minded to me. And I've seen confusion up close.

Her son said tonight that she was "96 years young," and that's good; she's getting there...

Last week we paid tribute to Joe Biden's dear mother, a cutie with decent legs. Tonight we pay tribute to John McCain's lovely mother, Roberta! Just because she swings Republican doesn't mean we don't like her, because, after all, that's an affliction I deal with and accept on a daily basis here on our own half acre.
Posted by dbkundalini at 10:42 PM