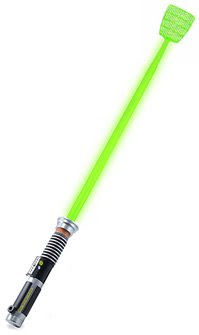 Last night as I was getting ready for bed there was a loudly buzzing fly in my room.

I was almost too tired to worry about it, but I knew if I didn't get rid of it it'd be landing on my nose or buzzing around the room all night. And I'd be thinking about it.

So I had to go to the trouble of trying to zero in on it. I had a flyswatter, but the pesky little thing wouldn't land. My only alternative was to stand in an area that had a white background, the wall, and anytime he came into that vicinity to swat through the air. But I wasn't getting him.

Then I thought of Star Wars, and thought, "Let the force be your guide." You know, in the sense that you have some hidden reserve of power somewhere that can help you kill this fly, and that just swatting vainly could be supplemented by the force, giving me an intelligent aim from beyond myself.

It didn't work 100%, probably because I was still too conscious and consciously reflective on the process rather than just letting the force actually be my guide. So I made a few more mad swats and felt discouraged.

But then, unexpectedly, the fly suddenly landed right in front of me, a black spot on a white wall. And I swung the flyswatter through the air with barely a thought and nailed him at a hundred miles an hour. He was stuck to the wall!

Let the force be your guide, Luke. It usually works!
Posted by dbkundalini at 4:31 PM