Sentimentality At The Grave 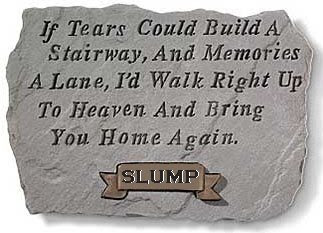 You gotta love the dead, don't you? I mean, maybe they'll come back and haunt you if you don't.

I remember the first dead guy I saw in real life, not just cowboys killed on TV. I'd actually seen him several times when he was alive. He was old, scary looking, and had an actual hunchback, and I was eight or nine. A guy like that gives a kid the creeps. My family bought some things from him, all the things of his business. Then he died, and I and about five other people were at his funeral. Later, I would be working with his things in the basement, start thinking about him being dead and maybe lurking somewhere, then I'd have to quit for the night.

After that I saw a few more, including my first grandpa to die. He was a nice guy, as I remember, suffering some severe emphysema from smoking, a car falling on his chest, and one lung removed. I think a guy should be tougher than this, but he died.

Some neighbors of mine had a funeral home in their home (they took the overflow from a funeral home, so bodies would only be there occasionally). This is true. We'd be over there playing in the living room with the kids and they'd have a casket with a corpse in it open, right there. I remember a rubber ball bounced too hard on the floor once, bouncing up into one of the caskets. It seems like one of us retrieved it.

Then over the years numerous others close to me went on to their reward, including Grandpa Slump when he was around 81 or so. That leaves me the sole survivor of a once proud family, not counting Grandma Slump, and all the others who are actually alive but just not around that often.

Today I was at a store that sells various sentimental things, placards saying "Pray," "God Bless This Home," "My Guardian Angel Can Beat Up Yours," all those kinds of things. And I saw one that I've seen before in little shrines that people sometimes set up, like in their yard, in a public park that I know of, at gravesides, of course, or by the roadside where a terrible accident has occurred. It had a saying something like this:

"If tears could build a stairway, and memories a lane,
I'd walk right up to heaven, and bring you home again."

I don't know if I like that entirely. At some point I think it's healthy just to accept it, and not think it'd be a good option to walk up to heaven and bring the dead back. Imagine all the legal trouble it'd cause. The will's already settled, your Social Security account is now cut off, you have no identity, no one's expecting you. But some crying relative with overactive memories took it upon themselves to walk up to heaven and bring you back. I mean, we might welcome a few people back. But there has to be some limit to it. We don't want to be overrun with dead people everywhere. Sure, I miss some folks when they're gone. But once I've worked through the grief, I'm not hoping to look up and see them standing there just because someone thought it'd be a good idea. The emotional trauma across the board would be devastating. If you're going for a walk, stay on earth!

I should have looked around the store a bit more, to see if they had one of my other favorite sentimental dead people verses:

"A golden heart stopped beating, hard-working hands to rest.
God broke our hearts to prove to us, He only takes the best!"

I think there's an obvious difficulty with this one. It seems like a major theological problem is present. If people who die are being taken by God, yet "He only takes the best," how do we account for the fact that heretofore, in past generations, so far anyway, absolutely everyone has died? Were they all that good? And if all God needs to not take you is for you to not be the best, doesn't this just encourage people to be not so good? Why try to be the best you can be if it means God's going to kill you and break all the hearts of your relatives just to prove to them how good you were? If this is the case I'd say we all have a vested interest in being scoundrels. The only conclusion is God encourages evil by punishing the good, and who can believe that?

The dead are dead for a good reason, for the most part. Let 'em go, let 'em be. And don't be dragging them back again!
Posted by dbkundalini at 9:56 PM