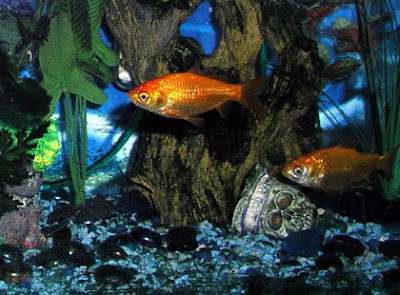 I really should get me one of those 10 gallon jobbies at Walmart. I saw it, I had my eye on it, it seems like a good idea.

There are very few downsides to the idea and plenty of positives, just thinking about it for a minute.

1. Nature -- I've always been a lover of nature. Fish belong to nature. There's nothing so pastoral and romantic than natural things. An aquarium is like watching heaven go by.

2. Easy Care -- All you have to do is feed them, clean them once in a while, and squirt in some anti-disease dope every couple months. Other than that, it's nothing but pure enjoyment, sit back and relax.

3. Responsibility -- I'm home all the time anyway, so I could take responsibility for the fishes' welfare with a minimum of failure. Some "responsibility" is actually fun. Plus, it's not like I need a merit badge to do the right thing. I'm disciplined.

4. Size -- A 10 gallon tank is small but not too small. Water is still relatively cheap. And if a 10 gallon tank breaks it doesn't do major damage. But it's enough water that you can tell it's there, not like one of those fish cups at the carnival.

5. Peace of Mind -- I feel that I would be more content watching the peaceful activities of fish swimming lazily through the day. Whatever stress I normally have would melt away by them swimming around without a care in the world.

But that brings me to the negatives, which I will list even though I don't expect them to sway my positive opinions to their negative side:

1. Disturbing My Mind -- I've watched fish and they can be very violent toward each other. They eat their dead, they eat their babies, they eat one another. I saw fish ganging up on a fish one time and eating his fins clean off. That left him spiralling around under the water shoot like a spent torpedo. In short, fish are barbarians and wouldn't contribute entirely to my peace of mind.

2. Size -- 10 gallons may be better for me personally, but the fish might feel very constrained. This could contribute to their violence, as most fish rival even the dog for nasty territorial instincts. Better a carnival cup and the contentment of one fish than a whole ocean of misery. And 10 gallons of water could do a lot of damage were it somehow to be shot full of holes.

3. Responsibility -- Face it, the novelty would wear off pretty fast. When the tank gets darkened from algae and fish crap, the filter's clogged up, the light's burnt out, the motor is rattling, and three or four fish are floating on top and the others are eating those, I'd be tempted to give up.

4. Easy Care -- Who am I kidding? You never know how much food is enough. And fish diseases are like a dozen different plagues. Half the time they're sick, the other half they're dead. Or you look in and they have a poop rope three times their body length hanging under them. It's disgusting. You get a side sucking catfish in there, it blocks the view. The only thing you see front and center is his big sucking mouth. You're revolted. You want to scrub it out with Lysol but without scum he dies.

5. Nature -- If you love nature so much, why are you eating bacon? Pigs are natural too. In fact, now that I think of it, all animals are natural. You don't own a tiger. Fish don't belong in tanks, they belong in the ocean. It's more like a perverse hatred of nature to have fish and animals in captivity.

Just going by the two lists, the negatives actually seem more compelling. Seeing the 10 gallon jobbie at Walmart was one of those serendipity moments. I get those and I get flighty: "I need a 10 gallon aquarium!", even though the thought doesn't usually occur to me. It's like an obsession that doesn't go away till I get one, then I have buyer's remorse (1), and (2) I'm suddenly stuck with the expense and responsibility of keeping it up and acting happy about it.
Posted by dbkundalini at 9:48 AM