I read somewhere that the church in Rocky Horror Picture Show was just a facade, I'm guessing like the old Hollywood buildings we used to see pictures of. It definitely looks real, and I wish I could see a picture of it from every angle.

That's quite a thing to build just for those opening shots, especially when there would have to be a number of actual church buildings around that you could easily go and film in front of. Why build a church front when there are lots of churches already built?

The house I'm imagining in this blog -- its overall theme -- burned down around 1979, sometime between 1978 and 1981, let's say. I have a few pictures of it but I don't believe I saw the actual rubble. Maybe I did and blocked it out. No, I'm sure I didn't. But going way back, i.e., to all those pre-burnt years, there's lots of pictures of it. In pictures, though, it looks like it could be a facade. 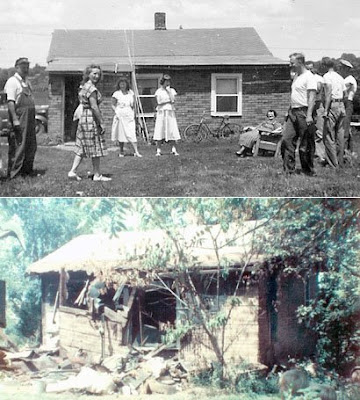 I like the arrangement of the people in the top photo. It has a kind of eternal look. And I know the people. The key thing here is that in those days it's not burned. Then later it is.
Posted by dbkundalini at 9:12 AM