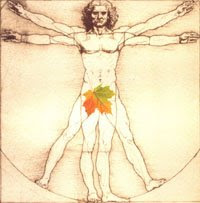 After yesterday's post -- in which I both hit the heights and dragged the depths, and both embraced you all and kicked you to the curb -- I felt like I had it in me both to break my hiatus and make it a permanent retirement. Now that's what I call being torn! I'm a lot like da Vinci's famous spread eagle man, so busy flapping my wings and kicking my feet that I don't always know if I'm coming or going.

But it hasn't all been in vain. Because growth has been real, with lots of personal discovery -- for me, and I'm hoping eventually for you. I didn't know I could fly so high. On the other hand, when I crash and burn there's very little left to sweep up.

And that's where I am now, leading to this time of hiatus.

I've been a skyrider, like ghost riders in the sky; I've caught too much lightning barehanded and now I'm singed. I flew too close to the sun, dangerously close, and my wings couldn't take the extra, excruciating, unpleasant heat. I must have made a Faustian bargain with the devil that I don't consciously recall: "In exchange for these enhanced abilities we will meet again one day," he must've said. I rose above my station. I ascended Mount Carmel, Mount Sinai, Mount Molehill, Mount Moriah. I cried out to the gods, "I defy thee! Striketh thou me if thou musteth!" I raced through an impossible labyrinth and disappeared at the unknown nexus, the fabled vanishing point. Where vapors flare and quickly dissipate. My body became fire and I burned through my clothes, leaving me, again, like the da Vinci man.

Who wouldn't need a hiatus after that? I know it must be hard for you to understand, when you sit there all passive like a baby in a high chair with your mouth open, waiting for your mother's spoon. The whole passive approach I've never liked. Even when I was a baby I didn't like it. My mother would show up with a fresh diaper and I'd say, "Give me the d--- thing." Then I'd chew her out and say, "You know I can't walk yet! Next time get me to the d--- outhouse before it's too late! Sheesh!" I know it's never a popular thing to admit disrespecting your mother, but forgive me this one time. I'm just wanting to illustrate the fact that passivity and me don't get along.

That's probably part of this whole thing, why I crash so hard when it happens. I'm surrounded by baby bird readers, mouths agape, never mature enough to leave the nest. You're great at taking, taking, taking! What has Momma Bird got for me today, this very minute? Your hunger's never satisfied. If I gave you a Snickers you'd still have your mouth busting at the edges, hungry for something more, more, more. So something has to give! Whether it's this blog, the newsletter, our real life meetings, none of it's been enough, and that's been an oppressive weight on me for far too long. And how to separate you out, the sincere and compliant from the criminal and demanding, like Garrett Al ... this has been almost an impossible task thanks to the lies of the internet.

I mention him -- Garrett Al. What a loser. His lust was not for my mind -- which could've done him some good -- but my body. The real issue was with Garrett Al's mind. It's as worthless as a peach pit. If he would've only sought my mind, not my body, then he'd've settled down and flown right. But because his mind is so far gone, all he can see through is that prism of primeval lust, and that means there's no way back for him. They put him in jail for the night, perhaps a fitting punishment for the crime at the social level. But as far as I'm concerned, the crime never dies. And I won't say exactly what I'll do if he shows up at my door again. Just let me say that Grandpa Slump did believe in the Second Amendment, and I feel more secure now knowing the full extent to which he did.

So that's where my hiatus stands as of right this minute. I'm taking a well-deserved break, while standing guard. And in rare moments of relaxation -- when I'm able to shake off the exhaustion for a second -- I'm trying to think of ideas and principles to share with you, my beloved readership, to try once again, likely in vain, to satisfy your needs. But right now I cannot do it. I must not even try.
Posted by dbkundalini at 5:47 AM