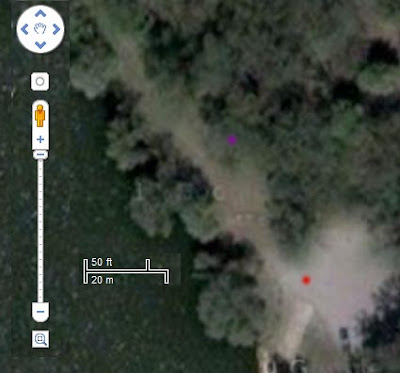 The other day I had a doctor's appointment. The medical student asked me if I ever get dizzy. I said no. But I should've said it depends. Because in certain states of excitement, I do get a sensation of dizziness. I feel it right now as I look at this photo. It could be that I'm just afraid of heights and this picture is obviously taken from very high up. Or it could be the excitement is from making an important discovery!

There's something I really like about doing surveillance from outer space. If only I had my own satellite, I could be guiding it around by remote control, and whatever you were doing on earth, I'd be able to catch you at it. Then, somehow, in some way you weren't expecting, I'd be able to lower to boom and that'd be all she wrote.

Having Google is like that with some clear drawbacks. You're able to do pretty good geographical reconnaissance. You're able to pinpoint with some accuracy the lay of the land. But it's not helpful in most cases if you're trying to catch someone doing something wrong in real time.

In this case, I've zeroed in on a piece of the local park where the industrialists or some of their underlings have been hanging out. What they've been doing there, I don't want to be too blue in my descriptions of it, or at least what I'm surmising, but I'm pretty sure it involves the workings of human reproduction without any hope of actual fertilization. You tell me, I'm imagining the bushes out there look like someone's had a shampoo fight... And since the industrialists are all men, we're talking about some activities that are on the seedy side to say the least, no pun intended.

For someone like me, who's afraid to touch the walls or fixtures in a public bathroom, of course these thoughts of my imagination are quite unpleasant. Add to that the magnificent grudge they're holding against me, and you've got the setting for some pretty sore dealings, were I ever to fall into their clutches, say, in a public place yet among a bunch of trees where no one can hear you scream. But checking it out from the satellite, I'm getting the job done while maintaining my purity. I can scope out the entire park, albeit in a fuzzy, less than distinct photo.

Now, you may remember a couple days ago I was writing about one of the industrialists* who warned me about a hole about 25 yards in. The hole in question has been a source of some mental discomfort on my part, yet if the industrialist* was sincere in his warning, of course I appreciate his gesture. Looking at the picture, I don't necessarily see a hole. Maybe the picture was taken a while back and a hole has opened since then. I've put a purple dot just above what sort of looks like a hole, but it could also be a bush. It seems like it's about 25 yards from the red dot, approximately where I was when the guy said this.

Still, if that's the hole, it doesn't look big enough to be threatening. Maybe, again, it's opened up wider since then. We'll probably never know, unless Google Earth comes around to get a later picture. It'll be up to me, I guess, to keep monitoring their site for updates. Or, assuming I eventually lose interest, maybe this will be it for the hole. I know I don't plan on actually going out there ... unless I can do it discreetly somehow. But how would I do that? Good question.

*Whether the guy was an industrialist or not is not something I can determine. The fact that he gave an apparently good warning to me means he might've been sent from above to help me, one member of the hedgerow of warring angels we hear so much about, who stand guard 'round the righteous.
Posted by dbkundalini at 4:31 AM