One way to tell that a company is really making strides is in the honors it receives. And that's the way it is for the Residential Industrial Movement (RIM) at this present time, as our members enter contests in the hopes of winning. So far, though, it's been a bust.

The industrialists -- the major industrial powers -- have had their honors programs all these years. You've probably seen the awards advertised on TV: Car & Driver's Car of the Year award, J.D. Powell's award for something, both of which are very prestigious.

But what we haven't been told is the kind of "in" the major industrial powers have had with the awards process. It's been carefully rigged to make sure the same dozen or so car manufacturers always win, the same dozen or so washing machine makers, and so forth. I don't know for sure, of course, how it works, since all this is probably done in a hush-hush way.

It's a lot like the way they accredit colleges. You have a team of accreditors going place to place, accepting lavish payouts, season tickets to lacrosse events and women's basketball games. And with a system like that, they wink and the college is accredited for the next year. Everything is very inside baseball, driven and sustained by corruption.

To level the playing field, of course, would be a good thing. But they make it very hard to break in. Doors are closed in our face. They'd sooner spit on the RIM as look at us. Yes, we will eventually bring them down. Then not only will it be said of the execs of the major industrial powers, but it will be said of the people behind these other schemes, that they will be showing up at RIM companies looking for any easy pencil pushing jobs we might have, but they will be vigorously turned away.

I personally know several companies that have been submitting samples of their wares for these prizes but they haven't been given much chance of winning. And to top it off -- take Spooner's vats, for example -- the board asked Ted to submit the vats "in triplicate," which is completely unreasonable. It takes him a week to make one, if he's lucky. All they want to do is get extra vats to sell on the black market and make a little more corrupt money.

My idea, like everything else, is if the prize-granting authorities are corrupt, we must simply make our own, RIM prize-granting authorities, with more fair rules. Then we give the award for the best vat ... we've all seen Ted's vats, we know they're great. Or we give the award for the best disposable diaper, or straitjacket ... we know the folks who make them, and we've all used them, so of course they're winners. The key thing is not the trophies we can give, but the publicity that goes with it, opening the eyes of the public to the quality of our goods.

And if they want to give us a free sample or two, that's their business. I'm personally open to receiving a few samples. I'm sure it wouldn't sway my vote one way or the other. I already know the products are top notch, but it might help soften me up. 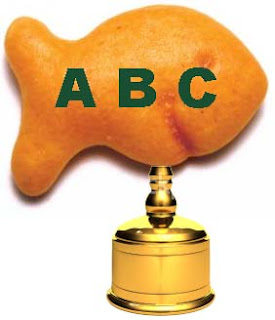 Coincidentally, speaking of awards, I have great news to share with all my faithful readers. This blog has been awarded The Gorton Fisherman Award for Excellence in Writing for 2010.

Not only did I win the beautiful trophy pictured to the left, but a month's supply of fish sticks. Now if I can just develop an appetite for the nasty little things...

I'm happy to have beaten out a lot of other worthy competitors, none of whom are especially good.
Posted by dbkundalini at 4:29 AM