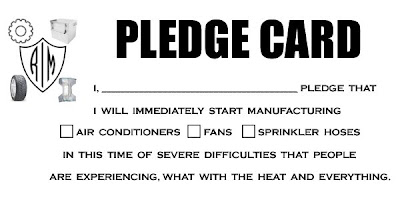 I put the call out yesterday for residential industrialists to help their neighbors with the heat. The summer heat has been unrelenting, coming down from the sun in droves, stifling my breath and I know the breath of thousands. It has been uncomfortable to be out in it, so much so that we are seeking respite indoors. With an air conditioner or fan, or, for kids outside, a sprinkler hose.

But there are many out there who are stuck without these things. And so for them, they're like the pioneers, or like the billions of people who lived before we had these, who had to just make do. How they did it, precisely, I'm not sure. The women back then wore long dresses and shawls. The men were in flannel shirts with a beard big enough to stuff a mattress. And they walked the trail from one end of the country to the other, herding cattle, burying dead horses, and taking the wheels off their wagons every time they had to cross a river. It was too hot to build a bridge, which would've been an enormous job anyway! But a lot of those folks back then didn't live as long as we do now. So their comfort/discomfort level was not such a big concern because they knew they were going to drop dead any second.

These days we have a little more sense. We wouldn't set out on a 3,000 mile walk unless we were well trained for it and had a support bus and bottled water. But that doesn't mean people aren't still suffering today, because they are. Just sitting at home can be a death sentence ... seriously ... and that's why we need more air conditioners and fans, and sprinkler hoses for the kids ...

So the call went out, and today the pledge cards are going out. If you're a part of the Residential Industrial Movement (RIM), I'm calling on you, regardless of what you manufacture now, to retool and immediately start manufacturing the items we need, air conditioners, etc.

As you all know, we have a glut of products in most other categories. There are warehouses full of wheels for hospital beds, industrial vats, tires, and disposable diapers. So these things can wait! What we need is relief from the heat! And that's why we need to get cracking on this great effort...

I myself have ceased all production of tires (temporarily) and have been working hard to retool. I'm jumping in with both feet and trying the toughest one of all, the air conditioner. Think about it, an air conditioner is a tough thing to manufacture if you're starting with nothing. I need to make dozens of different parts, all without really even knowing how an air conditioner works. They all have to fit together. They need to be tested. When you plug it in, it has to do something. And instead of having months to do it, like the major industrialists had when they came up with this stuff in the first place, I've given myself a deadline of tomorrow. The need is great and I want to get it going!

Fans are easier to make. Like I was saying yesterday, it's a spinning crooked thing. I want a bunch of you to make those. If you think air conditioners are a little too hard to come up with, no one's going to think you're lazy or shirking or giving just half best. Because fans are still good, and they're seriously nothing to be ashamed of. Of course, given a choice of being in air conditioning or having a fan is a no-brainer, but, still, if you haven't got an air conditioner, a fan is the next best thing. So, if that's what you pledge to manufacture, we can live with it.

Sprinkler hoses is something we threw in because we need to think of the kids. It's basically a hose with holes. If you can quickly outfit your plant to turn out hoses, adding the holes would be a lot of fun. And maybe the kids themselves would enjoy punching them out! This would be a good project for some of our larger RIM families. Just remember, you need to make the holes small enough so the water isn't just leaking on the ground.

If you'd like to fill out the pledge card and bring it by my place, that'd be great. I'm waiving the $10 processing fee. Or if you'd just like to commit to it on your own, that'd be fine too. Just get started doing your part! And remember, if we all do it, that'll be the best, because if we can end up with a real glut of air conditioners, fans, and sprinkler hoses, we can keep the prices dirt cheap. And everyone will be helped!
Posted by dbkundalini at 6:37 AM