My Tire Industry Rolls On 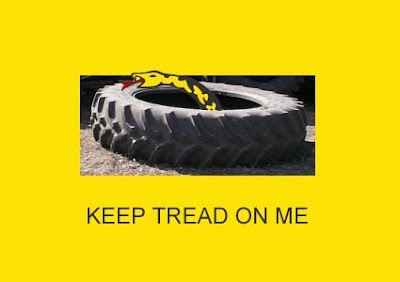 My tire industry rolls on, my little part in the Residential Industrial Movement (RIM).

I do make tires, good ones, if I do say so myself. With big, huge tread, sometimes 10 inches thick, depending on how it sets up.

My tires are works of art, each as individual as the spirit allows me to make them. There's really no two exactly alike, so they're good for lots of things. Putting on your truck, keeping as a spare, or just to have around the house as a keepsake, souvenir, or conversation piece. If enough people buy one, I'll be rich, depending on how much I make per.

I learned the craft of making tires the easy way, by dissecting existing ones, then charting it out on graph paper exactly as to what the various components were. Tread, of course. The walls. The steel belts inside. And so forth.

Now it's time to make the inside, which is poured as well and buckled down with the steel belting. It's all carefully hammered down into thin strips and melted in with a blast of heat. While it's still pliable, I give it a twist and center it in through the hole. Another blast of heat followed by a dousing of scalding water and we're getting very close.

The two sides then are fused together. We're getting to the end. On the outside, then, I put on a thick layer of metal scales, affixed by brazing and a blast of ice cold water. These really dig in to grip the road. In fact, it's hard to get your truck moving again if you sit in one place for very long. But rocking it back and forth for a few minutes usually manages to break the hold. Then it's up to the city to patch the road, so don't worry about it.

Lastly, I apply another blast of heat and cold, alternating as long as the current holds out, and the tire sets till it's room temperature, when I measure it to see what size it turned out to be. Then into the warehouse it goes. I've found that rolling it is easier than carrying it, if I can keep it moving and the scales don't get hooked on something.

(I left out a few of the important steps. It's all so abstract, it's hard to state it in words. There's an ionization process, which I'm not technically astute enough to describe. This is the part you really need to keep your eye on. I should say, if you ever try it, keep your hands out of the mix or they'll come up looking like hamburger.)

The process as described is craftsmanship in action. Every step of the way I insist on quality, and I usually get it.
Posted by dbkundalini at 4:34 AM