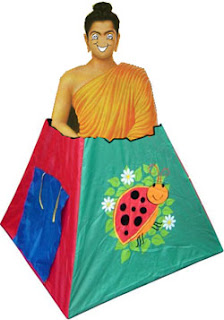 What a terrific master! Swami Sri Masturbananda goes to any length to help his chelas (students) realize the divine consciousness.

His whole teaching is a simple one, that each of us has a place in the highest consciousness but we generally fail to realize it. It's technically wrong to call it a place of ecstasy per se, for it is the place where the joy of life simply is. It's our birthright, our existence-right. It's where we always are, but with delusion ... we often don't know it.

So far, so good. That's what most masters teach. But our master takes it one step further. The divine -- the source at the heart of life -- has been gracious, giving us the means to experience the ecstasy, the highest consciousness, in up to 10-12 second glimpses, bypassing possibly a million fruitless incarnations. The awareness is literally here and now!

How this works out for men, most of us chelas can describe the process very easily. How it works out for women, they have some means of doing it which is mostly a mystery to men. Because our experience has mostly been that they're prudes who by and large have shunned our advances. But what we see in the media is different, that they are indeed supposedly very libidinous and can barely be tamed. Presumably in these activities, if indeed there are activities, they are also occasionally glimpsing the presence and joy of the divine.

Whatever women's experiences actually are, of course we know they do us men a lot of good, being one of the two main sources of the mind-stuff at the heart of this devotional activity. We like the wiggle in their walk, and, for some, the giggle in their talk is very nice. And who hasn't glimpsed a group of women bicyclists passing by at times, with the seat perhaps a little high? Even something like this, originating more in a desire for aerodynamics than in fueling some third party's fantasies, can be a very gripping image, one to mentally file away for future reference.

One of Swami Masturbananda's interesting techniques, in my opinion best practiced with as much privacy as you can manage, is to share in the actual essence of the person when they're no longer (apparently) physically present. Are you catching his drift? Everything is energy, and to be where it has recently been concentrated is to share those vibrations. A good term for it would be air devotions. With the imagination, remembrance, and the actual vibrations, it may be second best in certain respects, but it's still pretty good.

What I can describe is what I saw with the master himself in India. A group of giggling maidens went up the side of the mountain to get some laundry that was drying. They where there wiggling and giggling for maybe 10 minutes, folding their underwear and stockings and things. They had the joy of life.

Then they left, and as soon as they did, Master led out a group of students, pitching his little tent right on the spot. In the illustration above, I've made a cutaway version so you can see that he's in there; in actual fact, no man can look upon him in his heat and live. He's there because their essence, in part, is still there. With a few devotional moves -- hips swiveling, pelvic thrusts, etc. -- his air devotions are completed. For the average student doing this, the tent might collapse. For the master, with his greater power, it usually blows up, dissolves, or spontaneously combusts.

Is there any harm or foul to the maidens? None that we know of, although, again, with his greater power, it's technically possible that he has heirs he hasn't yet met. But, hey, we're in a vast, wonderful, swirling creation, and things happen! For the rest of us, air devotions -- whether after a Christmas party or a walk in the park -- are going to have few extraneous results, except possible arrest for indecent exposure. We just have to hope that our society lives up to its great principles of religious freedom.

Addressing that last point, there might be some value in tweaking Masturbananda's techniques, such as carrying a jar with you in public, then capturing some of the essence and taking it home for greater privacy. And of course in that case -- as if I have to tell you! -- you wouldn't need to pack the tent. You wouldn't even need a tent in that case, since you'd be home with your normal bed or bathroom. I don't know, you might even keep jarfuls in a pantry so you're not always having to run out.
Posted by dbkundalini at 4:44 AM