Underbrush And The Toymaker 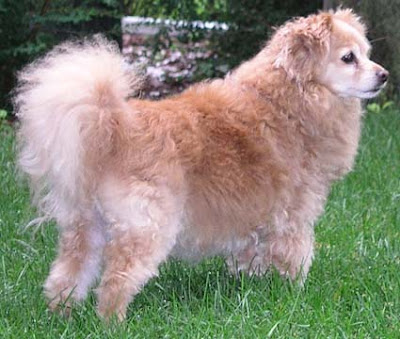 I went to the toy store the other day for Christmas shopping and was a little scared when I saw a big gorilla across the room. But it was a big stuffed gorilla with all her little babies. Then I also saw the other stuffed animals, beautiful ones, big tigers, lions, and all the other lesser animals.

Of course they had dogs, which were good looking too. But I looked all through them and didn't find one that looked like my dog Underbrush. It seems like they never have the various mixed breeds, which is too bad because it seems like there'd be a big market for all of us with them.

I immediately went to the counter to complain. The ladies at the counter claimed they had nothing to do with the limited selection, but I don't know, they looked pretty guilty. I asked who was responsible for this sad state of affairs, and they ended up blaming the toymaker. What toymaker? I demanded. Where is this toymaker?

Remarkably, they directed me to a local toymaker. I was really expecting a toymaker in China, someone who wouldn't be so easy to contact, but it actually turned out to be a toymaker right down the street, a guy working out of his garage.

I went to his workshop and found him very accessible, very interested in talking to me about the lack of stuffed animals like my dog. I flashed him the picture seen above and he backed up, he almost staggered against a wall of hammers and hooks. He clutched his heart and I was afraid we might lose him.

"What is the meaning of this?" He seemed angry. But it turned out he was simply stunned at Underbrush's beauty. Once that was cleared up, I asked if he could make me a stuffed animal version of her.

I thought maybe he was pulling my leg, really. I called him sir, out of respect, and told him I was flattered by his comments, but, really, you're a toymaker, surely not a judge of dogs and their beauty like at Eukanuba. You've made tigers, gorillas, and all the various breeds of dogs. Now suddenly you can't do this one? I asked if he could do something for me, maybe a representation, something made quickly out of yarn and baling twine at least.

"No! Not a representation! Not today, not ever! It would never do!" He was backing up like he might stagger into the hammers and hooks. I was afraid if he did that it might set off a terrible chain reaction like in the game Mousetrap, and eventually a marble slab (from his worktable) would fall and crush him. This was one dog he wasn't going to touch, whether it'd be baling twine or pipe-cleaners and toilet tissue.

"Please, please, please...." I tried to calm him, then I got tough: "This is ridiculous! Please use your talents to do something for us." I was a supplicant just as much as if I'd been wearing a robe and staring into the heavens with eyes like lights.

And that's how we left it. Meaning, all I have is the photograph ... and of course the actual dog.

Note: I thought I was going to lose Underbrush. The photo was taken the day it was arranged to put her to sleep at the vet's. She was hacking, hacking, hacking all the time, congestive heart failure. That was in June 2010. The vet did something, got some medicine for her, and waved a wand and spoke some magic words over her, and, believe it or not, she's still alive as of today, December 5, 2010. In the last few days she's been hacking some more. She no longer wears a halter or uses a leash, since these contribute to her problems when she strains for squirrels. And I don't feed her any more human food that has too much salt and other nasty ingredients. She's doing pretty well.
Posted by dbkundalini at 2:22 PM