Let's Be Sunbeams For Masturbananda! 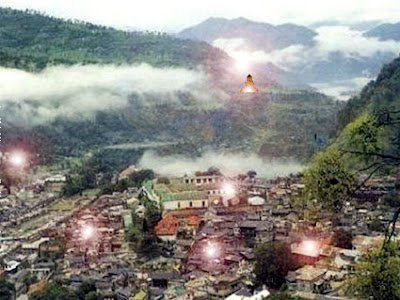 Swami Sri Masturbananda is a bright light in the firmament of masters, advanced beings, and avatars. And he gets brighter all the time. Because if he's wearing down, he stokes the inner fires and once again shines forth in glory. What a glorious master, who also calls us to be light in a dark world, beaming forth with the radiant energy that is in us!

For his chelas (students), it is a fantastic feeling to know that the master is looking out over us, happy to know we're following our devotions as he teaches. Maybe the rest of the sleepy village doesn't know what's going on, but to the master's eyes (and ours, to a lesser extent) there is a bright flash of light or even a beam as the highest consciousness is glimpsed in this heavenly work. He looks out and attracts the little beams unto himself on the mountain and helps channel them both up and down for the satisfaction of all.

We're so fortunate to be among his followers. Because, without naming names (the dreary know who they are), there are so many masters who have taken the same old dreary road of abnegation and asceticism, discouraging their followers to even lift a hand unless it's for the purposes of self-flagellation or to cinch up their hair underpants. Away with whips, the bad kind! Away with yak drawers! Swami Masturbananda calls us to lift a hand ... often and early... that we might drive away the clouds of morning and let the sun shine through!

The fact is, We're all light, star stuff. But our consciousness somehow gets stymied, or tricks itself into seeing darkness and even embracing it. To that extent we've fallen and original sin is real. But in the master's teachings, the original light is literally close at hand. Therein is the original bliss, the greatest bliss, present for each of us to know. Now, to a certain extent, the fullness of this realization is something that may take many of us millions of incarnations to reach. The difference in Swami Masturbananda's teaching is that we don't have to wait entirely, but we can glimpse the highest realms right now, for seconds at least, by following his way.

I was with the master a number of years ago in India. I remember his wonderful way of practicing the same basic techniques even though he is so much more consciously advanced than any of us. That means he is with us. And I remember his frequent retreats to the outhouse. We chelas would stand back at a safe distance -- it was a lot like the nuclear testing at Bikini atoll, goggles, the whole bit -- light would build up, you would see the wooden walls stretching out from the energy, and, finally, there was an explosion and the roof would blow off. It was all very intense.

Similarly intense are those times he's up the mountain. Devotees below notice the sudden appearance of daylight -- it seems like it's comes a little too early, then they realize what's going on. The look out their window and see the light, then the sun comes up a couple hours later. They smile and pull their blinds. For those who are not already spent, they redouble their efforts. And a small few, those who lift weights and have really big muscles, even triple theirs. I've heard of a few whose hand and arm turned to butter, they went so fast.

From the mountain, Swami Sri Masturbananda looks down and sees the smaller shafts of light building to a greater degree, and smiles. All is well on the mountain ... and in the valley.

Note: The picture has been altered only to enlarge Swami Masturbananda so we could see him. He's the same size as other men, most of the time.
Posted by dbkundalini at 6:34 AM