On Capturing The Essence Of Future Lovers In Jars 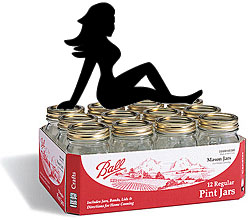 Ummmmm! I do like those curves, you sweet thang! If you'd just step out of the shadows and come down off that mudflap where I might see you better, that'd be great ...I can tell you like to get down and dirty ... Just let me get one of these jars open and you can slip in and make yourself more comfortable.

My mind's been racing, and my heart, since coming up with a nice riff on Swami Masturbananda's teaching about air devotions with a person's essence after she or he has departed. You may remember, he sees where the maidens are, then after they're gone, he puts his tent on that spot, giving him very nice relations with their remaining energy.

Of course this isn't exactly Swami Masturbananda's teaching, so it might not be infallible. Next time I see him I'll run it by him. And I know what will happen: If it's something he endorses, everyone will be doing it. As it is for now, though, it's up to me to try it or theorize about it or promote it. I don't really have any big reason to promote it, since I don't have any financial interest in the making or selling of jars. The only reason I might promote it would be to spread happiness among the general public, since I'm sure there's a lot of lonely hearts out there who wouldn't mind a date every night. Men and women, I'm thinking, although I've always had my doubts that women are by nature sexual creatures. In my experience, it seems like most of them would rather knit, crochet, or put on a mudpack, curlers, and go to bed early.

So if I do anything, like usual, it'll have to center in on the experience of men. And jarfuls of the essence of women, gathered or captured here or there, wherever a guy might reasonably do it without interference or trouble. I'm trying to think of where I was the other day, before I had this idea. There was a sweet young thang that went by. You'd probably like to have a whole case of her in jars. And label them, and carefully use up the supply, like 1000 year old wine, a sip every decade or so. You weren't there, but if you had been, you'd probably still be standing there canning essence! And there'd be no reason to boil it 'cause it was hot enough. Although boiling canned food is meant to get rid of bacteria, and I couldn't swear she wouldn't have some of that.

But labeling and stocking and all that, that's part of the theoretical work that I said someone would need to do. Because, frankly, I don't know how long someone's vibratory essence would stay fresh in a jar. Being theoretically very subtle, it could be that it'd evaporate or even go bad quickly. I know it's tricky to store mushrooms, just to name something that's physically present but is also evanescent in certain respects. You need to eat them about as soon as you find them. So, if we determine that a mason jar of essence can't be reliably kept, that'd have ramifications for a lot of this.

I'm going to keep thinking about it. And I'm going to use some of the jars we've got around the house before I buy actual canning jars. The trouble is they might not be as pure, since they've already had food in them. So I might get someone who tastes like peanut butter, or, worse, pickles. Here's a great idea, capture some essence in an old Tabasco bottle. Now that'd be spicy! Even if the bottles or jars are used, it's worth a try, just to get me started.

There's a few ladies who go by with their dogs every morning. So what I'll do, I'll be right around the corner and as soon as they're out of sight, I'll get over to the sidewalk and get what I can. And just hope when I'm pouring it out some lonely night it doesn't turn out that I got their dog mixed in with it. That'd be bad. Think of me in my bathrobe and suddenly a jar of dog essence is peeing on my leg!

What I might do is just leave a few jars around town, like where the cheerleaders hang out, and hope for the best. How, though, I'm going to know precisely what I've got, again, that's going to be a problem. Instead of cheerleaders, some of the football players might seep in, say, if the cheerleaders somehow get the essence of the players on them by the obvious exchange of energy that goes in that kind of symbiotic relationship. Then I'm pouring out a big jar of a sweet rah-rah girl and find myself gang tackled in my own bed! And the last thing I want is my backfield in motion...

So there's some complications to work out. But it definitely sounds like a good idea, at least in theory. You could have jars all over town, but unless they're carefully monitored, it could be disaster at every turn. I just need to have some way of examining the captured essence, otherwise there's no quality controls.
Posted by dbkundalini at 8:51 PM