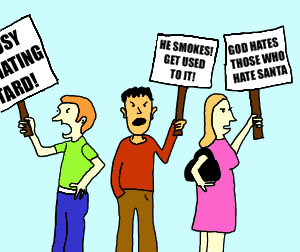 It's been a tough couple days around here. I've always known the American citizenry is a sleeping murderous giant, able to rise from its stupor if sufficiently aroused. It doesn't always take much, a few minor kicks to its psychic groin, like 9/11, a Facebook redesign, or the terrible Yogi Bear voice in the new movie. It really can be anything, if the media gets a hold of it and makes it the next biggest thing.

I've been involved in a few close calls, but so far there's always been other more vocal hotheads who step in and take the spotlight, meaning I've been able to remain in obscurity and not get any significant blame. But this time, it looks like they're trying to pin the whole rap on me and me alone. And as far as I can tell, if this is a matter for blame -- I think I deserve a medal -- then I guess this time I'll have to be it.

Thankfully for me, though, so far, it's only a local story, and I'm hoping that's the way it stays. I hope we can resolve this to my satisfaction without too much publicity. Or, I'd like to see some positive signs of progress, then have some other opportunistic guy step in to get the credit and thereby absorb the brunt of the blame as well.

It'd really be too much for me, let's say, to have CNN trucks and the whole media frenzy scene at my humble door. I really don't like criticism as it is ... I only read about half the mail I get on the blog ... I still have notes from my 2nd grade teacher my mom hasn't seen yet, that's how sensitive I am ... so to get it from strangers far and wide, spouting off, comparing me to the other great villains of history would be too much.

And maybe you noticed it before, that anytime some local guy makes the news, it's always accompanied by death threats? Meaning, I guess, that there's plenty of wackos out there who don't realize phone calls can be traced, email leaves a clear digital trail, and, even if you get me, they're doing wonderful things with forensics and you'll never get away with it. Still, in the heat of the moment, anything can happen. The police can't be everywhere. Unlike Sherwin-Williams, Dunkin Donuts doesn't cover the world. And they might be pro-Santa anyway.

They think I'm anti-Santa. That's the spin this thing has taken. That I'm opposed to Christmas, and they're even invoking God, saying God hates me. I know there's some group out there who's so close to God they have the authorized list of everyone He hates. If they get wind of this controversy, all hope will be lost. The bad news for me is that they're clearly attracted to any kind of nasty scuttlebutt.

I don't know how I could've made this any more obvious: I'm not against Santa Claus, tradition, Christmas, or God. All I wanted to do was call for some very minor tinkering with a poem, "Twas The Night Before Christmas," to take out one little reference to Santa smoking a pipe. Is that so huge?

I could almost understand the controversy if the protesters were pipe-smokers or big fans of the pipe. These fanatics really love the pipe and expect everyone else to as well. I'd say they're just babies who haven't given up the pacifier. And before they get upset, just let me say, I myself have smoked a pipe. A few times in the past. The terrible thing, in my opinion, about smoking a pipe is that you waste all day keeping it lit. There's something about a pipe, it can't keep the required mixture of fire and oxygen in its little bowl; it's self-snuffing, the most suicidal form of smoking.

But my cause, if that's what you want to call it, has a very small goal but with some very major benefits. If we can protect untold generations of children from this line in the poem,

just think of the positive difference that might come from that. Face it, those not yet born, but who definitely will be born, will also grow up hearing this poem. But the big difference is they won't know the difference if this line is missing. And, look, we're talking about a virtual infinity of new generations coming along. Let's just think of the next million generations; this poem is going to outlive us all, especially the ones who started smoking thanks to Santa's bad example. In that million generations, if we can stop just one child from smoking -- let's say he's a little guy a couple hundred thousand years from now -- wouldn't it be well worth it? I believe so.

When it happens, they'll interview him and he'll give all the credit to there being something about this poem that he can't put his finger on, but whatever it is, he'll say, he definitely felt no desire to start smoking. Crowds will erupt in glory, young women will name their children after me, and college freshmen will spend the whole day in their dorm, privately celebrating.

Of course, the trick is negotiating my way through the thicket at hand to the clearance ahead, from the darkness to the sunshine. And I'm looking for some other guy to step in to take the credit. Because, at least till Christmas is come and gone this year, I'm very afraid I'm going to be getting death threats from die hard Santa fans. Well, I've got to go. Sunrise is at hand, and that's about the time they always get up.
Posted by dbkundalini at 6:20 AM