Why The Cow Goes Moo 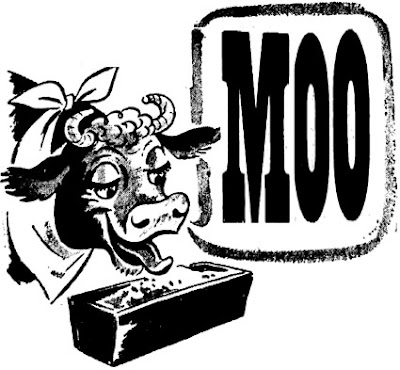 The cow didn't always say moo. And there's no reason to suppose it did, even if the way it worked out would seem to indicate the way it started. We tend to think nothing makes progress in time. So when God created the cow it came down a shute and the first thing it said was moo.

No, no. And once again, dear friends -- don't be skeptical -- I have traversed the corridors of whatever, most of the time swimming upstream, to reference the Akashic Records. It's not that hard to do, however it is very frustrating because the other quacks who came before me got them very messed up and out of order.

But if you're looking for particular files, things that the average clairvoyant doesn't care very much about, such as on the evolving vocabulary of cattle, they're not too messed up. Most people of course are more interested in the words and travels of Jesus, how Buddha came to be fat and skinny at the same time, and why George Washington cut down the cherry tree. They've pretty much left questions on the various animal vocabularies, and the more subtle things of animal dialects, alone.

Speaking of myself, I'm interested in all these things. One, because I really respect cattle for coming up with something so simple and catchy, and not that far off the mark, as should be clear to anyone, from the Primal/Original Mind sound of OM. It's just flipped around, hinting first at dyslexia, or more purposefully at humor, or perhaps it's merely the same exact thing, only as seen from a consciousness apparently different in typical expression from our own. I frankly don't see a downside to saying MOO, being convinced that it doesn't make a bit of difference.

Anyway, getting back to the Akashic Records. Here's what I have to say about the Records. They're better than nothing. If it weren't for the Records, I'd simply have to make this up, about the cow. And if I did that, perhaps folks wouldn't see in it the same authority. Which isn't to say the original Akashic author didn't simply make it up, but since He and She is a lot more mysterious, we're willing to buy it.

So, please, if you're in that camp, just let me just transcribe the damned thing and be done with it. Here's some of the other vocabulary the platonic perfect cow and its immediate descendants toyed with:

How it was narrowed down to moo is an amazing story in itself. They saw a baby cow walking through the pasture who kept saying MOO. They started making fun of it, then they made fun of it so much, continually, that it finally stuck. It's the old line about "First, they laugh at you..." come to life!
Posted by dbkundalini at 8:51 AM