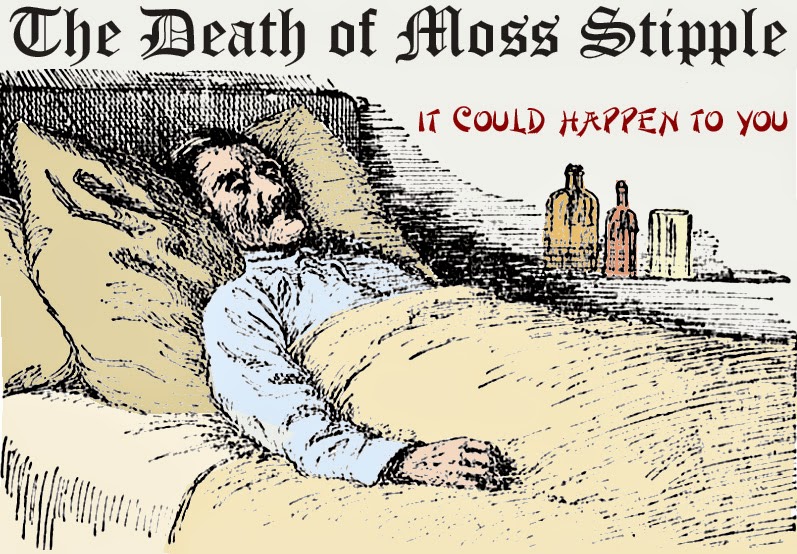 Note: I'm sorry this post is long, but I can't cut short the story of a guy's death. My recommendation is that you read it over a period of three days. That way you can pace yourself, not tire your eyes and mind, and be better able to consider the issues of life, family, mortality, and passing. There's two great truths about Death: It plays no favorites and it plays for keeps. Reflecting on Death, as I often do, I am set a'trembling, and yet I wouldn't have it any other way.

The stories of how people die -- how we die -- are among the weirdest. We aren't sure if it's supposed to be a social process or simply a solitary act. Dogs crawl off to die alone, but we, perhaps because we have more feeling for appearances, make a production of it. Still, the dog isn't too far off the beam; there are times when dying alone is preferable.

Moss Stipple wanted it both ways, at least he alternated between them, in a strait betwixt two. We shall call him by the term of affection that his family knew him by, Dad. (He wasn't my father, by the way.)

Dad was in the hospital. All hope was gone, according to those in the medical field. He was dying and, if the process went on as everyone expected, he would be dead soon, very soon. As the time seemed to loom very near, those on the scene carried on their conversations in hushed tones. Nurses and doctors conferred as much in sign language and with well understood nods as anything else.

Dad rouses and demands, "What's going on?", then drops back to silence. "Nothing, Dad, just get some rest." The nurses stand still a moment, then return to their business, in motions designating lieutenants among the family. As if to say, "You're on cotton swab, you're on soothing music, you're on bedpan, ring if you need anything." The doctors, recently on the scene in conference, don't do any of this; they simply vanish down the nearest doctor hole.

After a bit, Dad rouses again, and holds up his finger, and whispers, "I want to die alone." To me this is more heroic than to face the namby pamby look of one son on cotton swab, another on music, etc. With resolve, he sends everyone away. Good for him! Because all the chatter, their hushed tones, and the various distractions take away Dad's dignity as a man.

Alone then, he's contemplating, trying to keep fear away, trying to stave off the sense of abandonment, which rises quickly. He sends for his family, who return, some still, some preoccupied with whatever. One son has the undesirable task of arranging a birthday party for his twins. They're talking together: "Has the doctor been in?" "I haven't seen him." "No, he was in for just a moment. Don't know what he said." "Dad, what'd the doctor say?" Dad says with difficulty, "What?" They busy themselves with the swab, the music, and ready nitrile gloves in case the bedpan should come into play.

The nurses return to the scene, needing to shift Dad. There's always some danger of bedsores if he's left in one spot for more than an hour. "On 2, 1-2." They shift him; now he's on his side, his bottom out for a moment, with all demurely turning away.

The son's phone rings. "No, I don't need two cakes, just two places at the head table for the twins. That's right, one cake, two places." With this commotion, everything from the swabs to the birthday arrangements, Dad comes-to strongly enough to send them all out. He again wants to die alone, in peace. They think, 'Who are we to argue against this good man?' and leave.

Back at his dying, Dad busies himself with his final thoughts, the thoughts of Everyman: "I had a pretty good life. I loved my wife. I'll see her again very soon. I and my family, the whole Stipple clan, many generations of us, have our names written in the Book of Life. Life is good." He pauses for a moment, about to cry, and thinks, 'My dad wasn't like this. I was at his bedside.' Wanting to be the dad his dad was, then, Dad sends for his family.

The whole crew's back. They've been involved in some debate going on between themselves and three competing doctors. One doc wants more tests, but, the family says, "Dad's side is like a pin cushion." "No, we've been using the port." One wants to try a complete Ensure regimen. One wants a morphine drip timed for every hour. Some agree, some disagree.

The nurses are back from their break, smelling of smoke. It's time for the family to man the patient, so things get hectic again. Dad can see this busyness in all quarters, all except for a long haired grandson in the corner preoccupied with a video game, otherwise sullen.

An hour or so later, the sons and daughter are tapping their toes, impatient. "Why don't they tell us anything?" "Maybe they don't know anything." "Then tell us that!" An uncle -- Dad's healthy brother -- comes in, offering to spring for a cafeteria run, ice cream for the kids, saying, "We don't know how long we might be waiting." The others shush him, but Dad's conscious and can hear their tiptoeing. His brother comes to the bedside and says loudly and distinctly, "How ya doin', Moss?" Dad gives him a hand squeeze as his answer before the brother takes the four grandchildren out for treats.

This leaves Dad's kids bickering over the various slights they've felt in his treatment at this hospital. One complains the hospital is nothing but a corporation, and that's the way they make you feel. "Nothin' but the bottom line!" Of course Dad hears all this and rallies once again to send them all away. The nurse hears his whisper and tells the family, "He wants to die alone." "We'll let you know ... one way or another." In the excitement, Dad's senses are sharpened, and he looks around the room. Though it's a little blurry, he makes out a lot of metallic technology. The buzzing and beeping of IV bags, with the intercom in the hall, adds to the feeling of malaise.

Nurses return to shift him. Dad whispers, "I'm dying, what's one more bedsore?" But rules and regulations being what they are...

All alone now, Dad decides, "No, I don't wanna die alone." He tries in vain to get the call light. He's thrashing as much as he can, but it's fallen halfway to the floor, dangling past the bottom of the bed. He tries to call out, but his voice is unheard, very raspy and weak. He rattles the bed. He wants everyone there for one last final goodbye. But instead he dies, his eyes rolling back in his head.

At the nurses' station a hush falls over one particular monitor. Part of the family's there nearby. They see the nurses rushing off. They trail quickly, sending the 14-year-old to find the others in the cafeteria. Everything's just rumor at this point. "What are they saying?" "They haven't said anything yet." "This could be it!"

Entering the room, they find Dad totally still. Others arrive, saying "Is he---?" The nods of silence and downcast eyes tell the story. The daughter offers up praying hands, a signal to the others that they go to silence. Especially appropos when the kids show up with the last bits of their cones. Nurses are quietly disconnecting spiggots. The uncle with the other sons come in. One son says, in a very solemn, dignified way, "He said he wanted to die alone. Now he's with Mom."
Posted by dbkundalini at 2:05 PM