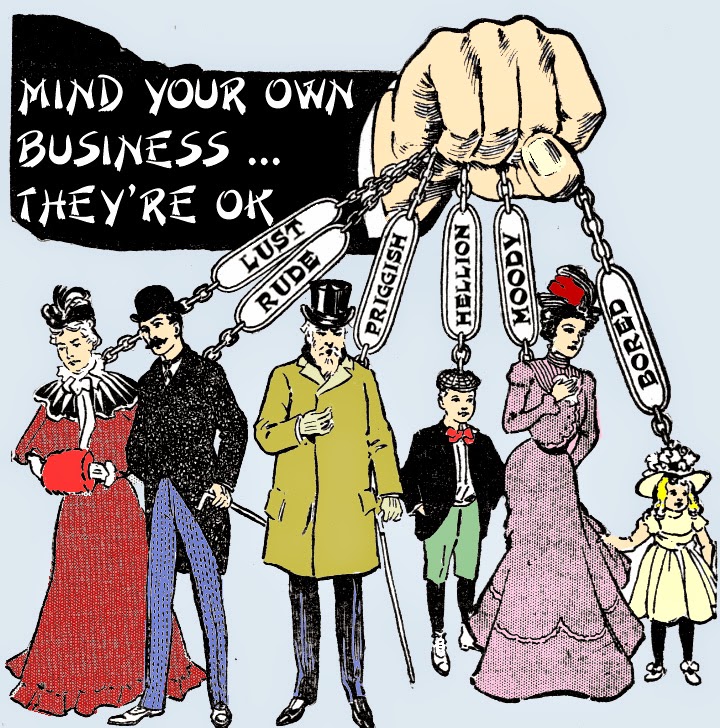 At the risk of inflaming an already troubled world, I have a few comments to make. Further, I know I am putting this blog and my reputation at risk as well. For I have very sensitive readers, most of whom have told me time and time again that anything that rocks the boat doesn't sit well with them. In other words, they've threatened to "hit the doors" if I ever say anything evenly the slightest bit controversial, in anger and rage abandoning me out of revenge.

But I shall be bold. I've weighed all the different factors -- and others I'm too afraid to list -- and have decided, "Nothing ventured, nothing gained." If my readers, precious in my sight though they be, are so super sensitive, so supercilious, to anything that even might rock their world, and however slightly at that, are they really worth having? In that case I'm as much in chains as the poor folks seen in my illustration.

Anyway, being bold, here's my sincere contention, Everyone's got something going on, some problem, let's say, something that's holding them down. It may be a complex, a behavior, a predisposition, a habit, or longings, not yet acted on but enslaving them every bit as much. I will simply lay it on the line: I feel sympathy for them and want their lives to be better, to enhance them as much as I can, if I can.

I will make a few comments on each one, expressing myself in sympathy and grace, thankful that it's not me, for There but for the grace of God go I.

Let's go left to right. The older lady's chain is LUST. I've known several people on the chain of lust, true story. They're always on the make, sniffing the air for whatever opportunities there might be to get their jollies. As I'm given to understand, lust is a terrible taskmaster, capturing first your attention, then keeping you firmly on the hook until you've gone the full mile demanded. For the lady here, as sad as it is to say, there's no turning back. She will either grab the guy next to her, RUDE as he is, or the PRIGGISH guy. Who, being PRIGGISH, might put up quite a fight.

Then there is RUDE. I really hate it when people are RUDE. Their biggest thing is they've given up on human sympathy. See the connection? If you have sympathy for other folks, you will bend over backwards to understand them and to accommodate them. But being RUDE is to show a lack of sympathy, showing itself by acting mean. Have I ever been RUDE to someone? This is something that, yes, I have done. But my sympathy is such that it's never gone on for long. I get over it very fast.

PRIGGISH.  I've actually been accused before of being PRIGGISH ... because I believe in clean living and I don't allow blue material on my blog. Me PRIGGISH? Ha! Let me say I'm a little turned on by the lady in the pink dress. The little BORED kid looks like she could almost be my daughter -- if Pink and me got married, then did it, 40 years ago when I was young. I see she's MOODY, which can be good, if she's clawing cat MOODY.

HELLION - All boys are potentially little HELLIONS. I used to be a boy, and still use the HELLION attitude as a boy does. But it's never misbehavior, or used in being RUDE. I'm not a vandal or anything like that. I use the HELLION nature if I need the confidence to do something, like jump over a creek, climb over rocks and boulders, something hard. I think "I'm a boy!" and dive right in, fighting and going at it like a tornado.

MOODY - As said above, I like a certain amount of moodiness. It gets old, though, if it's constant. Variety is the spice of life. Mix your sullenness with good cheer, grumpiness with bubblyness. Keep me guessing, but not so much that I'm perplexed.

BORED - Little girl, why would you be bored? You have your whole life ahead of you. You know next to nothing about anything. Everyday should be a day of excited discovery for you. I want to see you bouncing around, going from one project to the next. Let's set you up with finger painting activities, kite flying, origami, reading cool books at the library, and going to various fun outings -- touring museums, theme parks, and going on trail rides. As for theme parks, though, I'm BORED by them, so I'd skip that.
Posted by dbkundalini at 4:40 PM