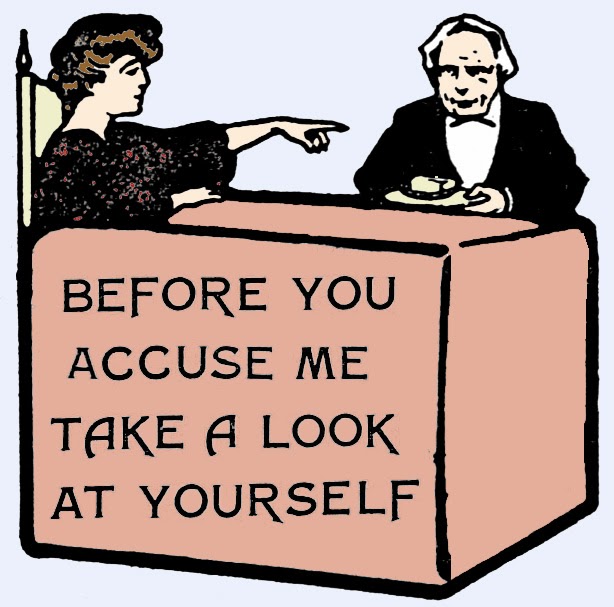 This is just the kind of argument you want to get into ...

You caught her fair and square, bald-faced, lying, red-handed, in the act, in flagrante delicto, as it were. You had her right where you wanted, names, dates, suspicious comings and goings. This would be your big chance to be rid of her, no questions asked. No one could blame you.

Then -- you should have known -- as sure as the sun doth rise, she has the names and dates, and suspicious comings and goings of you as well. A little tit for tat, what's good for the goose is good for the gander, or vice versa. You tried to avoid that infernal lipstick! Proving to yourself once and for all, there's no fool like an old fool!

It's the same old story, times two. You're out and about, you catch an eye, an eye catches you, then there's a smile and an exciting closeness. It's a crowded room, pretty dark, you can duck through this curtain and out this door, the back door, and find a booth somewhere. No one's looking, you think. In this whole big world, surely you can duck scrutiny for a paltry hour; you've been around, you see people, they're out of sight in a flash.

But there's always some little thing. Someone crossing the street the opposite way, catching a glance, noticing something out of place, a slightly different person on your arm. But they don't say anything, don't greet you, and maybe turn their head to look the other way. Saving their kind attentions for later, the gossip mill.

She, however, was very discrete, coming up with one excuse after another for her absences. Doctor appointments, visiting a sick friend, Christmas shopping in July, having her dress mended. But you started thinking, Something's going on. And decided to call in a private detective for answers.

He tailed her, but good. She wasn't so secure she didn't look behind her and around. But she kept right on going, not noticing him. Then the assignation, a dark stairwell, a key to the door. Their meeting went well, such as it was. The detective was back with the details within the hour. Now to confront her! And be done with it!

She was ready, though, the evidence she has against you bringing out an added brazenness. This is why she had no shame!

Fortunately, friends, the above scenario is fictional. The very sad people in the illustration, just actors, helped me make a point. The point being, if you haven't yet crossed that line -- and there has to be a few of you who've thus far held back -- there's still hope for your relationship. You may seriously think you've lost the fire as a couple, but it's very likely that's just a deception. Because whatever it was a long time ago, the mutual attraction that brought you together, isn't dead. Much more likely, you've simply set it aside, by neglect, or from a lack of imagination. The old fire's still there, present somewhere, just waiting to be rekindled.

I've had friends who've crossed that line, and I've kept their confidence, only because they're my friends. But I know they're miserable. Had they only come to me before it happened -- this goes for male and female -- I would've told them, "Don't do it!" In my favor I would've brought out the old truth, "The grass always looks greener on the other side of the fence." I would've then lead them through a few questions -- delving into their thinking -- before emptying a pitcher of iced water in their lap. They'd have come up cussing me, obviously, but when they got hold of themselves, they'd have thanked me.

It's too late for them now, many of them, but that doesn't mean it's too late for you. Let's say you're getting ready to go right now. But somehow (Who knows how it happens, but thank God it does!) you found your way to this blog -- a very popular blog, yes, but still obscure enough that you basically need divine guidance to find it -- and you're reading this post, and it's hitting you like a ton of bricks. You're saying to yourself: "Yes, yes ... just the word I needed, as within the hour -- or maybe even sooner -- I was planning to throw it all away with some hot little floozy [or tall, dark, handsome paramour with a pencil-thin mustache, smoking a Swisher's Sweet, very sexy.]"

It's fantastic news to me to know now that I had some little part in changing your plans. And that you've decided to take another look at your mate, your partner over all these years. She ain't so bad, is she? He's still pretty cool, isn't he? You look up, you look at each other, there's a meaningful look, a glance, and a sly smile.

Forget everything else! Take your pill and fill the tubs in the backyard! Maybe you can make it before sundown!
Posted by dbkundalini at 5:20 PM