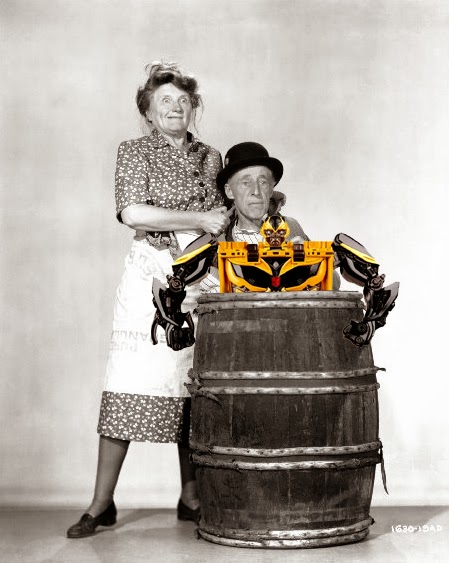 "But," Transformer fans say, "who needs to know about--- Who'd you say?" I politely, patiently repeat the name, "Ma & Pa Kettle," sounding it out as slowly as possible. The first two words rhyme; see if you can get that much first, Ma & Pa. Then think of the old phrase, "A fine kettle of fish," and that'll help you get the rest, Kettle. If we could now move on...

I might be among the last generation to love the Kettles, having grown up watching them on TV. And I attribute many of values I learned to the Kettles. Catch the difference? My values go back to the Kettles, not the Transformers.

But not everyone was as fortunate, as one generation gave way to another, raised instead on the Transformers. As I understand the Transformers, they're involved in all kinds of sci fi, live action fighting, weaponry, and destruction. Their world is filled with enemies to destroy. How things have changed!

In some of the Kettles' films there were folks of the community who didn't approve, or felt they couldn't countenance the Kettles' homespun ways. But no one destroyed them. Instead, the Kettles proved themselves truly wise even though they seemed to be know-nothing hillbillies. Ma was the wisest with lots of smarts, while Pa in his innocence, and more limits, showed a more naive wisdom. You really couldn't go wrong with the Kettles.

As for the Transformers, I only wish they'd held off on that brand of entertainment, to give that generation a surer foothold on the threshold of maturity. But the switch, if it had to come, had to come some time. Still, how unfortunate it was, coinciding with a serious psychological crisis among youth, who suddenly were given to spray painting things and gratuitous destruction. Today's rampant tattoo craze can be traced back to the rise of the Transformers; you're no longer happy with who you are.

The Kettles weren't perfect, though. Pa smoked quite a bit, as was common then. But he and Ma stayed home a lot and found happiness there; they had 15 kids. That's sweet. The Transformers, though, being machines, didn't know the same love of two human beings for each other. And that's communicated in the overall tone of their show. The Kettles had to know each other's feelings, and mature in their outlook, and watch for opportunities along the way to enhance their relationship. Then it was necessary to nurture their kids, and send them forth with the same values.

But the Transformers, what'd they even get out of bed for? You're a machine! If you get up, it's at someone else's instigation. And if you're able to get up "by yourself," you've been programmed to do so. You have no soul, you have no good in mind, no relationships to speak of, except what else you can destroy and lay waste to. It's ridiculous. No wonder society's been coming part at the seams since we went from the Kettles to the Transformers!

The way I recall, at first, the Transformers were supposed to be semi trucks or large motorcycles. Then they opened, or unfolded out to reveal giant robots. Which then took part in destructive behavior and mayhem. At that point I pulled back, never allowing myself to become immersed in it. I do know that over the years they did this, that, and the other thing, with multiple presentations of the overall concept described above. Big whoop!

The Kettles, though, as a family, in all kinds of social settings and through many dilemmas, present a human story, with good lessons to teach that kids could proudly emulate. I remember when they won the dream home of the future. It had lots of gadgets ("transforming" life as they knew it), but, unlike the Transformers proper, their transformation did not change them from the quality folks they had always been.

The Kettles are now part of a bygone era in entertainment. And how much worse the world is for it! The Transformers, on the other hand, have arisen, and dominated entertainment in the last few decades, contributing exactly nothing, to be exact, squat. A lot of malice and the spoiling of our youth.

Note: A couple of you wondered how I know so much about the Transformers if I'm so against them. I'm a social critic. It's my job to know things.
Posted by dbkundalini at 1:18 PM