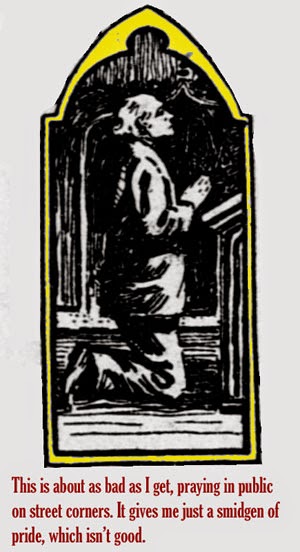 There's a bitter struggle going on inside the soul of man, I'm told. Friends tell me how they're torn from two directions, good and evil. It sounds dreadful, frankly, and I guess one of my biggest fears is that something like that might someday happen to me. Hope not!

Even in my innocence, however, I have not been entirely clueless about these things. I too see multiple paths and choices, which, however good my own options are, are enough to make me understand that not everyone is as fortunate. I'm often torn -- riven -- between two very good choices. Do I do this, something good, or this other thing, also good? It gives me pause. Fortunately a flip of the coin resolves the question, which, for me, is divinely determined.

But for my friends--- It sounds hideous for them. They've told me things that have made my hair stand on end, and goosebumps have been another reaction. I've had to wonder at those moments if indeed I do have it somewhere within me, like them. I wonder, How do I understand these things, never having experienced them. I can only resolve it like this, I'm just smart, or, again, it's divinely determined. Whatever the truth, Saints Be Praised!

It could be the saints, or it could be the angels. We've all heard the line about having "better angels." But they're not always successful (in others), leaving the field wide open for "worse angels," who, although they're worse tend to best the better! Ironic and weird. Boggles the mind. Definitely something for further exploration, as long as the taint of evil doesn't get on me.

My own saints and angels are very good at all this stuff. This is all literally true, in case you're wondering. As I think back, they came to me at a very early age, and just stayed. I don't think I'm bragging by saying I made a good home for them. They found me in innocence and they never left! What a great job for them. If you're an angel, you don't want to be assigned to someone who's going to immediately fall. That's a good way to be called on the carpet, the Big Carpet! But if you can luck out and get a charge like me -- someone never falling -- imagine how that looks on an angel's record. Looks fantastic.

I should apply -- I really should! -- to have all angels removed and see if I could do it on my own. I bet I could. I've had enough experience by now, no matter what the temptation. Even if there was no angel to help, I'd avoid it, stand up to it, and prevail! No doubt. I really think I'd be OK.

But, and this is important, I'm listening to my better angels right now, and they're saying not to go for it. So at this point, I'm not doing it. They've never deceived me yet, that I know of, so I'm very sure they're telling the truth now. The clear message is that I might not actually be that strong on my own. And once I tasted sin, there's no telling what it might do for the future. I better keep my better angels, and stay pure. Great advice!

Stay true, OK? Yours for clean living, Dbkundalini out.
Posted by dbkundalini at 6:06 PM