The Pages of History 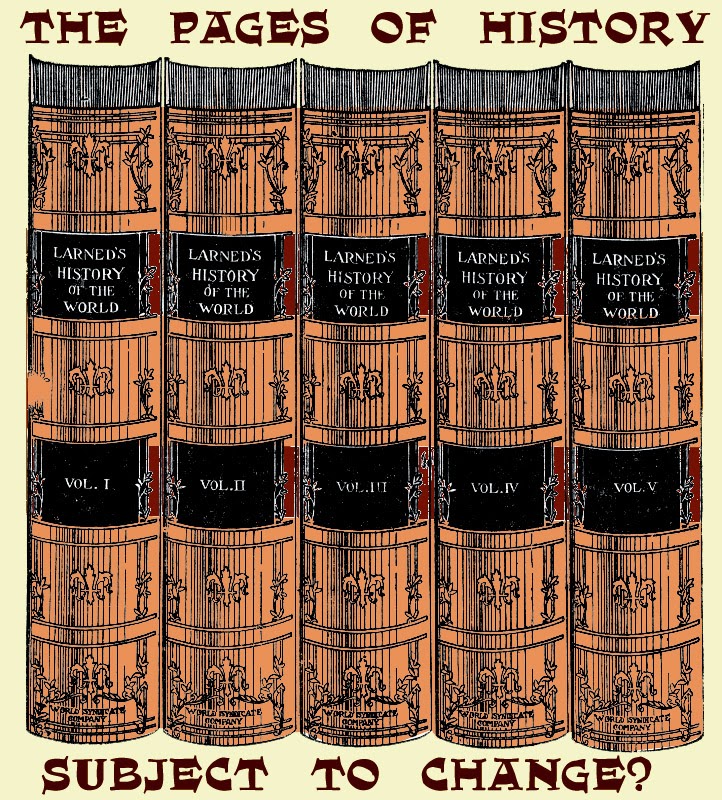 My basic point today is that the past is not set in stone. It can be changed, if there's a very good reason and if you don't know what you're doing. Naturally, I don't know what all the good reasons would be, but I feel a dire emergency might qualify. Similar to adrenalin, where a 99-pound weakling is able to lift a Mac truck to save a kitten. Plus, I think swearing-to-something is important enough in the cosmic economy that you could just change history.

Here's how I see it working. Say you're with people and everyone's shopping and wants something. There's a buddy system, and you're buddies with a girl who's wasting her money. She wants a new pair of shoes, but you're afraid she won't stop there. So you get her to swear. "Do you swear on your dog's grandfather that you won't buy anything but shoes?" She thinks, "My dog never even met his grandfather. Do dogs even have grandfathers? I've never met him either," so she swears. But you go to the bathroom and come back and she's bought extra shoe strings. The phone rings and her dad tells her her dog's gone. "He was just here!" the dad says. She gets home later and there's no sign of the dog. She swore on "The Pages of History!" A bad thing. But she reasons, "The dog ran away, I'll get a new dog."

The second episode also drives the point home, but perhaps there's wiggle room here too. Two buddies at the state fair. The undisciplined one is eating everything in sight, much to the other's consternation. "Someone's gonna get sick!" he thinks. Now, the undisciplined one wants a corn dog. The disciplined one remembers his buddy's dad has a bunch of Boy Scout memorabilia on the mantle, souvenirs of when he went to National Jamboree. "Do you swear on your dad's Jamboree stuff that this corn dog will be the last of your prodigality?" He swears. But next thing he's got a snow cone! They get home and the Jamboree collection's gone. His dad's on the couch, crying, thinking thieves broke in. But his son knows, or believes, he screwed with "The Pages of History." On the other hand, maybe they were stolen. Father knows best!

The last incident is similar, with one gigantic difference. Two friends walk by DQ. One friend hasn't had a snack all day and the other's gorged himself on snacks. Clearly, he doesn't need anything. The first one says he wants a snack, but only if the other swears on the existence of DQ itself that he won't have anything. He thinks, "The existence of DQ itself?! What kind of idiot are you? DQ has a worldwide outreach and has been in business 60 or 70 years." In this case, however, he doesn't order a thing. He's true to his word. But going to the table, he sees an extraneous chocolate chip and eats it. Immediately they find themselves empty-handed, standing on a vacant lot, no whoosh of the store disappearing or anything!

They call the police and report the disappearance of DQ, but because no one's ever heard of DQ, they think it's a crank call! The police get there and the two guys are standing there. But there's no way they can convince anyone who's never heard of DQ that an ice cream shop was ever there. Their sincerity keeps them from going to jail. The friends leave and research it. Indeed, there's not a DQ anywhere in the world! The whole enterprise is simply gone ... vanished from memory ... all because the guy violated his oath with a chocolate chip!

In this case I see a whole different ending. Showing that you could mess with "The Pages of History" and come out on top. They know the concept of DQ is a winner, so they immediately get loans and investors and build 12,500 DQs throughout the world, and they're filthy rich within weeks. They try then with all their might to swear to things and renege, hoping they can duplicate their success with McDonald's and all the others. But as it turns out, you can't do it on purpose .... it had to be true swearing. They sell DQ back to Warren Buffett, who doesn't remember he already owned it, and retire at 14.

So here's the problem. You (my reader) can't do it now either, no matter how hard you try, because I tainted your mind with the idea. And if you tell anyone else to do it, having impure motives, no matter what they do, they won't be able to screw with "The Pages of History" either.

My advice is forget the whole thing. Then maybe someday, innocently, you'll forget and swear to something worthwhile and accidentally get rich. But don't count on it.
Posted by dbkundalini at 6:07 PM