One Night at the Haunted House 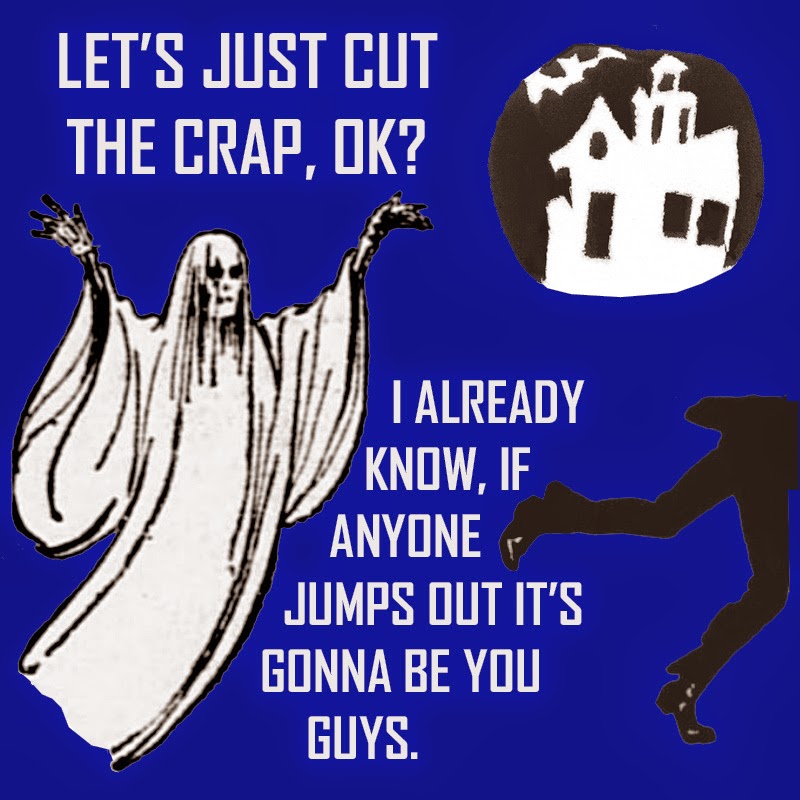 Uncle Cleaver finally died -- Yea! -- and left me the old family place in the country, a scary looking old place -- Crummy Manor. I was there for the reading of the will, seated at the head of the table, around which was a fearsome assortment of angry looking retainers. Uncle's cook, butler, gardener, handyman, and maid. They'd been with him for ages and there I sat, more or less a stranger but the last possible guy in the family who could inherit the place. I felt quite out of place and unwelcome. They shot me daggers.

The lawyer read off each of their names, with each in turn looking downcast upon inheriting nothing. That said, I was a little leery when the will specified that they could still share the manor jointly, if the rightful heir was unable to stay one night. I thought, "What? One night? How hard could it be?" I looked around and imagined their devious thoughts, seeing the grinning, rubbing of hands, and furtive glances at one another.

I felt a tremendous fear well up in me. Then I thought, "Hey, I've seen this movie before!" I called bullshit on the whole thing. I just laid it on the line: "I know you're going to do your damnedest to chase me out, but the truth is I'm not gonna let you. I've got your number, each one of you." I set in listing their schemes. The gardener would have a metal garden claw, the cook poisoned food, the butler knows every secret passageway, the handyman's good with traps, and the maid would get me in bed, the bed would fold up in the wall and I'd be impaled.

If none of that worked, the same cast of characters, no doubt, had costumes hanging inside the walls, a ghost, a werewolf, a skeleton, a leopard, and a French maid dress. In addition to the impaling bed, there'd be poison darts, a noose, a trapdoor, a flaming boulder at the end of a catapult, and a tray of ice cubes for the maid, if things got too hot. I came right out with it, "Each of you scalawags is prepared to do anything you have to to inherit Crummy Manor."

The telling glances continued as I spoke. I looked at the handyman, twiddling his thumbs. And the butler, nervously tugging at his cummerbund. And the maid, hitching up her bra and fanning herself. I knew they were all dangerous in their own way, but I kept my eye on the maid the most, never knowing if I might catch a free shot. She shot me a private glance that I read as a request for a private meeting.

I stood to my feet and slammed my fist on the table, "Gentlemen, I've seen it all before. Let's just cut the crap, OK? If anything happens, if anyone jumps out at me through the night, I know it's gonna be you guys. I don't believe in ghosts, werewolves, walking skeletons, or any of it." Then Greta and I stepped out and I shared with her some of my private fantasies.

She and I passed into a secluded hallway, where we kissed longingly. She saw I was an extremely affectionate soul and broke down in tears, confessing the whole scheme to cheat me out of my inheritance. I swore that if she were true to me, good things would come her way. She looked in my eyes and saw the sincerity. I thought to myself, "I may just give the entire estate to Greta, for her honesty." I turned the thought over in my mind.

She pulled out a detailed list of the evening's schemes, with all the stuff I expected, darts on wires, a skeleton suit, and most intriguing of all, a stunning seduction scene, in which she and I would be sharing a bottle of wine. Then when I set my glass on the table and we commenced a full love scene, a hand would reach out of the drawer and switch it with poison. "How tedious," I said, "I've seen it all before!"

By now, though, I figured the rest of the staff knew I knew, so Greta and I would be safe. But just to be extra sure of not being observed in flagrante delicto, I put masking tape over the eyes of the paintings on the walls. Then it was time to bear down and get this show on the road. I was kissing and stroking Greta, who indeed did come prepared with a French maid outfit, which she was very proficient at wriggling in and out of. Ooo la la, I purred, the only French I know.

I hate to spell everything out -- it's possible someone under 18 might read this, under 16 in Arkansas -- but we were building toward the decisive moment. Our breathing was heavy, our eyes were rolled back, we were panting, there were bold declarations of love, and I for one was all hands. It wouldn't be--- too long--- now------- when, The doors of the wardrobe burst open, and out stepped Uncle Cleaver, very much alive, not a corpse, not a ghost. Himself, in the flesh!

He boasted of staging this entire spectacle, having suspected Greta of being unfaithful to him, etc., etc., and knowing that the arrival of his nephew would only constitute "fresh meat" in her eyes, with which to fulfill her lustful ways. She pulled the sheets up almost to her eyes and was shivering in fear, white as a sheet. Cleaver came at her, very sharp in his tone, and very strong, having lost his grip. He shouted insults at her. She pleaded, "You were dead, Cleve, I thought you were dead!"

"So this is how you console yourself, in the arms of my fool nephew!" The rest of the story doesn't matter much. I got the hell out of there. Greta's now cooking at the diner downtown. I see her once in a while. I don't say much. But it's on always my mind, how close we were to the very top, then Cleaver had to jump out. I'd like to ask her out and pick up where we left off .... or start over ... probably about have to start over.
Posted by dbkundalini at 5:32 PM