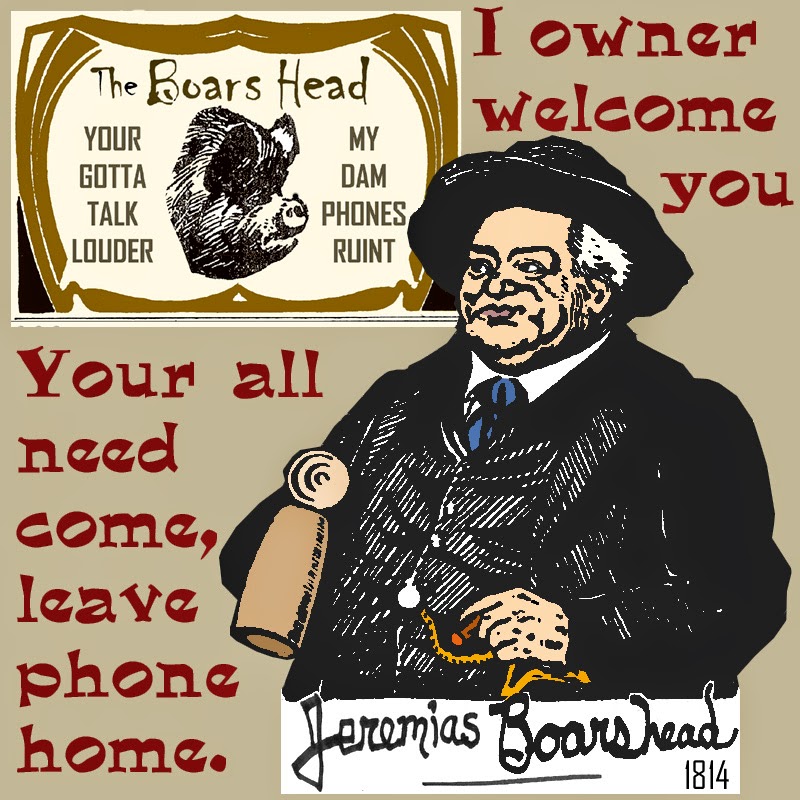 1814
At the Boar's Head Public House, Andermatt, Switzerland, peasants from the countryside and the people of the village are joyously sloshing tankards of grog in great celebration. The grog makers are bringing it in as fast as they can put it out. The tankards are being filled and downed, filled and sloshed boisterously.

Certainly everybody there is merrily sloshed, whether out of their own drinking or their being sloshed by a neighbor. What a happy time, "Here's mud in your eyes!"

The keeper of the Boar's Head -- old Jeremias Boarshead -- later cleaning up the dam place, thinks back on the festivities. He pauses with his brooms and mops and recalls even his own brother in the mix there, sloshing with the worst of them, calling out in celebration, "You dirty bastard!" to the merriment of all.

There were no enemies, only the best of friends in those days -- a neutral place -- when the grog was flowing. Even if sober and dry they would've been enemies. But a tankard of grog in your mouth or coming through the air is the great leveler of a people.


2014
The same damned place is going strong, with some updates, some improvements, maybe. The sink's got a new layer of porcelain. The big difference is the drinkers, coming in as they so often do with phones, computers, and all these dam devices. It's technology on them, the delicate, dainty widdle technology, that nobody can get grog in or its delicate mechanism is spoilt, ruint.

So when the spirit gets lively, from whence it comes, and the grog is flowing, and the shouts of "bastard" are at their most fevered pitch, you hear the saddest words known to man, "Oh, dam, you bastard, you only now just ruint my phone!" The man runs quickly to the back room to grab paper towels, getting it out of the plastic case as hurried as possible and getting it dried off. It spritzes and flashes before blinking off black. "Out the door with me!" he declares, going out the back door.

But the spirit's still lively, though, in the main hall. I'm right under the massive head of some massive animal attached to the wall. A boar, its head. There's drippings from its hair, trickling down its forehead, on to the glass eyes and running much quicker, skipping the nose and making it straight to the lips and chin, and running quickly and dripping endlessly, depending on how much grog there was we got flying.

Bastard me! I turn to check my messages just as a tankard crisscrossed the room, unbeknownst to me. Thankfully, mercy heavens, I heard the whiz and was able to get my phone under my pocket liner just in time to celebrate the tankard's explosive arrival at the big boar's head. More spray going everywhere! I give a hardy and hale shout, "Yea!" Doubling down, I crash a tankard into another bastard's tankard and it sloshes us good. A little gal with a tray's down below, beaming up at us. Cute little thing.

But nothing would be the same, would it, for a studious fellow opening his iPad in this frenzy, only to have it doused with the sloshing by six good mates crashing tankards all at once, going in toward one the others in a conjunction that could easily only possibly end in one big mess. He looks down at his iPad on the spritz, splashed now beyond recognition as a working and vital device. The bastard's gone, it's dead, ruint...

High Tor, the cash register guy, moves through the crowd with his raincoat. We all have to laugh, as we look over and see such a massed assembly of raincoats, plastic wraps, umbrellas, and various diversionary heavy tarps looming over the delicate integrated mechanisms of the register. The son of a bitch was made to communicate with the outside world, it was. Foolishly! They could've done better with a wooden drawer. This thing beams its workings to the office, where the accountant, Old Max, dwells, and from there it's a pushed button's job to relay the accounted sum to the local banking establishment. And in a crowd like this, O!, it was so constantly busy!

Yeah, well ... I poke this one crazy bastard in the ribs, who looks at me with stupid happiness all over his face till he sees my grand plan at once. We will soak the cash register with grog, and let it spritz its way across the floor, if its source of energy will allow it! And so we do. And so it's ruint! The old boy knows the other guys more than me, and we assembled all ourselves around the thing -- we're truly too wasted to be held culpable for our actions -- and it was round robin, one by one, dousing it in grog. A roar of celebration went up as it fell to the floor and spritzed and jumped like it was limping for dear life, any possible shelter, the shadow of a table. There it died and a host of connections were utterly lost forever.

No sir, 'twouldn't've been this way back in 1814, the longtime bartender of the Boar's Head, laments. Back then they could've made the cash drawer swim to the ceiling and we'd still have been able to pull out the pieces of silver and make it a decent payday. Now we just have to hope the soaking of the wet hasn't extended as far as the bank. And that all our dealings hitherto have beamed their way all the way there. Do you think that they did? I'm putting you all on the honor system. The place now is closing, check back tomorrow. We'll settle all debts.

Ruint phones, computers, pads. Tomorrow. Time is no healer.
Posted by dbkundalini at 11:48 AM