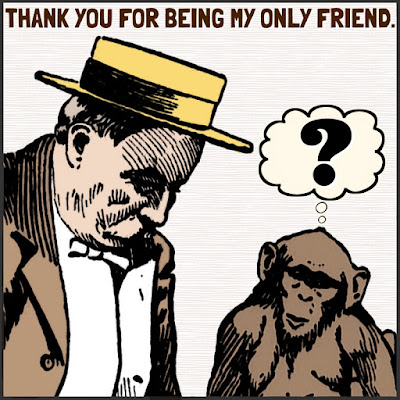 Everyone likes to have a friend. It’s great for your self-esteem. There are of course some very antisocial people with something wrong with them, perhaps their wiring or some mental lapse became a habit, whatever, who would be the exception. Those of us who do like having friends know what they mean to us, fellow feelings, moral support, and someone to talk to. Other friends we have are more or less incidental, folks we know at the fringe, those who do particular things for us but we don’t see them often, like the guy who fixes our tires if we (rarely) are involved in a police chase and run over spike strips.

And everyone likes having the things that go into friendship. First, let me say, this again excludes those who are antisocial in various ways, whether they don’t like having friends period, or they have friends but aren’t eager to confide in them the various problems they may be facing, choosing rather to maintain their privacy and sweep the problems, or at least any discussion of them, under the rug, carefully concealing the fact that they are likely guilty of those problems and a lot worse, if we only knew. As for myself, it’s not an aspect of friendship that I really depend on, because I try to avoid all trouble, particularly of a criminal nature -- because police chases and replacing tires becomes expensive -- and anything else I may or may not do I keep to myself.

So we’ve learned so far that having friends is an unambiguous blessing and essential to one and all, depending on how the terms are defined. It is a blessing for those who choose to have friends and are not antisocial. And it’s also a blessing for those who choose not to have friends and are antisocial up the yin yang, because it gives them a distinctive to boast of, identifying them, setting them apart, that they are so dainty and special, at least in their own foolish world of worthless fantasy.

As for me, no, I have nothing to sweep under the rug. Never have, never will, and those times when I have had something to sweep under the rug, the way I do it, and the means of getting it done, to the extent that I maintain power over the circumstances -- I have been caught or ensnared in various nets over the years, police chases, pit maneuvers, poison darts, etc., thwarting my intentions -- I take my opportunities and make the most of them. Not only do I want the more obvious facts to be hidden, but anything and everything that might constitute a trail, even of crumbs, leading again to a complete exposure, everything naked to the light of day, perhaps including myself -- a bad feeling -- and whoever it is riding with me. Let me just say now, and I raise my hand to heaven on this point, I have no idea how she found her way into my bed, then on to the interstate. We were not actually friends, it was just a mutual quickie.

But let’s also posit for the sake of argument that there is guilt, I suppose a casual acquaintance with someone -- perhaps a friend -- might come in hand, to help me get a good deal on new tires, or if the problem is evidence and a place to bury it, to conceal whatever is too big (or smelly and decomposing) to be buried later. Certainly we’ll wait for the city pickup and dispose of the sheets, triple-bagged, unmarked, and set those on the curb about three blocks away.

Whatever we may have sacrificed, and it’s been substantial so far, we hope we can recoup, enhancing and lifting our self-esteem, which to this point has been fragile.
Posted by dbkundalini at 6:00 AM