Alone, Do Not Disturb 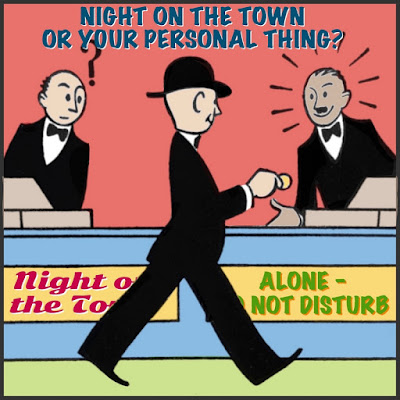 Part 19 of 30
There's Death In Them Thar Drawers

Who's the real men among us? Is it the foolish man always looking for a “night on the town” and experiences of the flesh up the yin-yang to the point of settling for sloppy seconds, thirds, fourths, perhaps twelfths (!) -- anything over 10 indicates a disturbance -- or the wise man going demurely to his room alone, declaring proudly that he’d rather not be disturbed?

I know the one I resonate with, Mr. Clean Living, Honest Abe, Ole Fraidy Cat, Everyone’s Friend, Nobody’s Sucka, Proudly Abstinent, Johnny Nothingseed, Chas Tity, For whom even cable TV’s a country mile too racy. Who needs something not quite as strong as the mint on the pillow. Who orders white milk and says “Make mine a double.” Who long ago forgot the only dirty joke he ever knew. Who wouldn’t know a boy from a girl without the dress or pants. Who climbs the walls just to keep in practice. Who double-locks doors against the temptations of others, not himself. Who orders vanilla pizza. And who when he craves a tight one means a chastity device.

If you want to be like me -- and there’s no one happier -- you start with the very common sense affirmation: “There’s death in them thar drawers!” Everything follows from that. Then you develop (cold turkey, so develop isn’t the right word) the ability for zero physical contact with any partner. And if you can manage that, it’s downhill from there. You’re a happy social outcast, no one wants to talk to you, etc. But there’s lot worse things. Take it from there and every temptation will be your sweetest enemy.

But of course you've got the power, you’re a sitting duck. 1) The power to resist, obviously; and, 2) the power to substitute joy for sorrow, turning your sorrow into joy, just like the Boy with the Midas Touch did with everything he touched, turning it into gold, giving him a whole new way of doing good, making gold and giving it to charity. For you now, when it’s the foolish "pride" of other guys to spring for a night on the town, then waste their night and their substance, you’re well refreshed, giving a pillow "the what-for," let’s say, while keeping your mind as pure as mother's milk.

Play your cards right and they’ll all be saying: “There’s death in them thar drawers, but that guy’s the first guy I’ve seen in like-forever whose drawers are a wonderful life all their own, no death, not a trace of death to his name, not even the barest whiff of sulfur. In fact, he walks by and smells like a garden from mythology, where everyone holds their heads high and greets one another with a smile and a hardy "How-de-do!"
Posted by dbkundalini at 6:00 AM