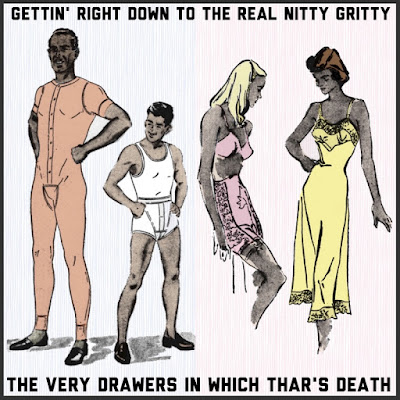 Part 12 of 30
There's Death In Them Thar Drawers

I’m feeling conflicted with this one. I know underwear models (supposedly) perform a legitimate service for society. It’s all arguable, of course, and I may give some of the arguments pro and con, I don’t know yet. Just let me say, though, I hope the graphic isn’t too explicit or out of bounds for you. I really debated whether to obscure the racier parts, then didn’t. And I also almost separated the models by gender to individual posts, but thought it better not to stir up your passions in feverishly waiting for the next day to see what the next underwear shot would be. Better to just put them out there together and get it over with, if they’re presented at all.

Let me say, just as a matter of personal privilege, and to offer what I hope is an exculpatory note, we know what’s going on here and these images are not intended to rouse any feelings, urges, longings, or temptations to get down and get off, now or in the future. In fact, just the opposite. You should look at these wicked people and their open-to-the-world underwear as illustrating the overall cautionary theme we've had this month: There’s Death in Them Thar Drawers! If you take the theme as expressing a bitter outcome, then you'll see in the picture wise caution, certainly nothing to long for but something to shun. Let me say with all the solemnity I can muster: If I can save one person from the death due to them thar drawers, I'm happy. On the other hand, if I find out this explicit post actually led to a hundred, a thousand, or even a million deaths, I’ll be sorry.

OK, we have Dad over here in the orange union suit. He stands proudly, displaying his underwear as if called to sell it, copies of it. He has all the vigor you want in a dad, apparently a non-smoker, a man about town, friends with the guys at the coffee shop, and probably volunteers with the Scouts, Little League, and the church youth group. Just wait, though, till the youth group gets a glimpse of that reinforced triangle on his drawers! I pray that doesn’t happen.

Next to Dad there’s the shrimpy son, although for being shrimpy he seems good and stout. The muscles on him suggests someone who works out. And his look of vigor suggests someone who’s had the personal self-control to forego touching himself or worse. Instead, he’s channeled whatever libido he claims into building appropriate muscle-mass. The look of his biceps says he’s made active use of his arms, again, all very appropriate, which I’d imagine would be from playing the piano or carrying a bass fiddle home to and from school, the thing taller than himself!

The daughter, she looks almost too frisky for comfort, posed in relation to the mom like someone competing for affections, and even possibly plotting to take over the family, whether that’s simply the kink of her mind or an actual nefarious plan, maybe to abscond with the family’s financial cushion and make her way out of town with a high-spending mustachioed, tattooed ex-serviceman (dishonorably discharged) on his motorcycle, springing for the gas.

Leaving us with the mom, who looks like a halfway decent mom, certainly no one I’d kick out of bed for eating crackers. She know how to get right down to the real nitty gritty, MEOW! She’s Mrs. Crocker with meals, but some relation to Joe Cocker when it comes to putting on a show and getting down. I don’t think I should describe any of my other feelings, except to merely hint at them by saying, in my book she’d be Mother of the Year … every year!

If any of that strikes you in the least bit lascivious, please make note, nothing’s changed, there is now and ever shall be death in them thar drawers.
Posted by dbkundalini at 6:00 AM