Bugs, The Dangers Of Breeding 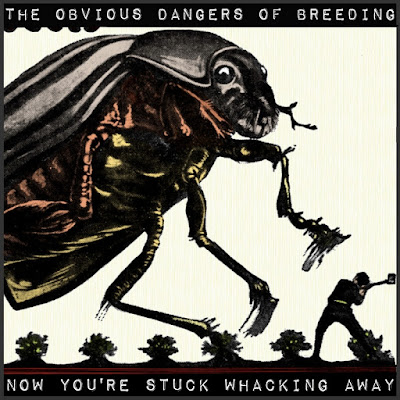 Part 26 of 30
There's Death In Them Thar Drawers

Have you ever given real thought to the process of breeding? Not just what happens in those hot moments of ecstasy but the whole range of the act from flirting to consummation? And at this point I’m not even talking of what we do as human beings -- trying to keep ourselves under control long enough to stretch it out to the full measure of the time we have -- but of bugs, insects, the sects they form for themselves and the sex they’re doing doing doing, all quite unseen in the walls, under the floors, and about as bad, in the basement.

I seriously go to the basement and realize it's another world down there. So, with winter coming on, please be careful in the basement. The bugs, the spiders -- say you fell asleep down there -- might carry you off to their many lairs. The size they have (or lack) and their ability to carry things even very cumbersome, is enough to give anyone pause. A nuclear accident and they’d possess the world, if they don’t already! They’re creepy, they’re crawly, and they're doing it, popping out new bugs everyday as we speak. Just looking for -- I don’t know what! -- your dirty sheets to curl up in, a disposed rag, flakes of skin, blood, bone. Even chicken bones in the waste-can, meaning they've infested the kitchen. There’s no telling what they might do.

The old Hollywood movies we used to be so afraid of only scratched the surface of what’s possible when it comes to a creature not only willing to breed but actually breeding 24/7, up the wazoo and back again, repeat until nauseated. I’m nauseated, and I know this is obscene at some level, but it’s the clearest call to attention you’re going to get this side of a dirty magazine. What kind of example are we setting?

Certainly nothing so clearly says “There’s death in them thar drawers” as creatures bearing thousands with each thrust. And they’re also meticulous about it, guarding their pile of eggs, knowing by foul nature the exact temperature it has to be, the exact arrangement it needs to be, and the precise timing it takes to go from zero to a million, bringing their eggs to full infestation. We're not that smart! But see them stripping a cardboard box down tiny piece by tiny piece. That’s the fluffy bedding they need. See that tangle of human hair apparently walking itself across the floor from the brush to the basement door? Look closer, there's a purpose!

They’re watching you do it -- don’t think they’re not -- and it gives them ideas, which they would've had by nature anyway. We think we’re the lord of our house. But sit very very still. Try this: Take the battery out of the clock. Listen to the silence. Hear the supposed silence falling away subtle decibel by subtle decibel, a kind of low grinding noise in the distance. There they are! Under the rug! Overwhelming! Your masters! In the next minute they're so big, so fearsome! You need to run screaming from your boudoir, never to return, and, yes, never to return to that way of life. Abstinence is now the only way!
Posted by dbkundalini at 6:00 AM