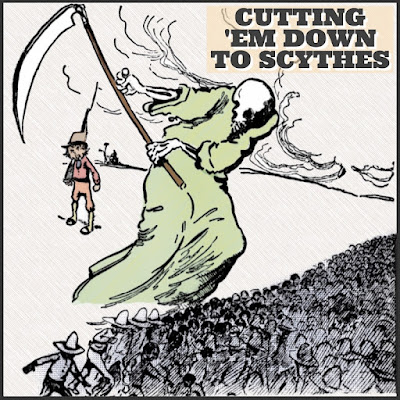 Part 6 of 30
There's Death In Them Thar Drawers

There’s a lot of my fellow men around, along with the other major segment of the population, their womenfolk, who have been careless, to put it mildly, with what they’re packing. I actually know some of the temptation of plopping out what's packed in your drawers, but fortunately I also know the benefits of forbearance without being a forebear myself.

Yes, that’s right. I made my mind up a long time ago that the older generation knew what they were talking about: “There’s death in them thar drawers.” And it was obviously true, because people were getting old and dying all the time. Including my great-grandparents, some of whom I knew! They looked at me like they didn't know who I was, that's how wasted they were. Their sins had prematurely aged them; they were already old when I was born. Then my regular grandmas and grandpas. The weird thing is this was the time of the world wars, so I beat the odds by being born at all. They were being mowed down by the grim reaper. A few more would pop up and the reaper would mow them down. But somehow my immediate people were missed.

Those were lessons I heard growing up. The street where we lived, a lot of people went to war and never came back. Which had an interesting effect on the yards up the street. Their lawns were completely neglected, one of our constant complaints. “Every time you let your lawn go, it gets weeds and thistles, and the spores and seeds come floating over to our place and we get ‘em too!” It was by thistles, weeds, etc., that Grandpa taught me the facts of life. All the way up to human beings and the conclusion, that, clearly, “There’s death in them thar drawers!” So I learned that man has children, they start a war, Man goes to war to kill the children. Then thistles take over and we need a new lawn mower.

It’s sad to put it out there like that, I know. But we can learn the lessons and be positive by dropping out of the whole scheme. Instead of having sex (death in them thar drawers) we can keep our purity. One obvious benefit of purity is not enough people to start a war. But without a war, man is thwarted in his desire to go to war to kill the children. Leaving less time for thistles to take over -- giving the survivors better lawns, but without children more or less condemning lawn mower factories. Who themselves might start a war, or encourage sex merely from a selfish profit motive, selling more mowers.
Posted by dbkundalini at 6:00 AM