The Secrets Of Abstinence 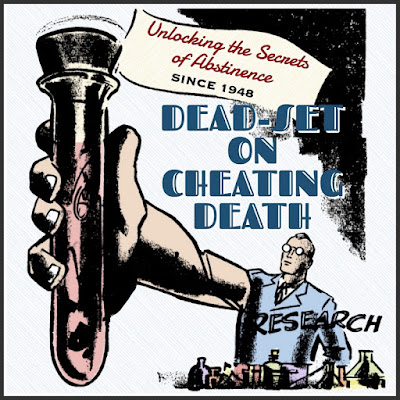 Part 16 of 30
There's Death In Them Thar Drawers

What are the secrets of abstinence, something more dependable than welding your zipper? That's a great question, thank you to Joey from New Orleans, the self-confessed young former horndog who sent it in. And he's right, welding's no good as long as we can still, by hook or crook, cut our pants off with a simple pair of scissors. What would work? When you’re young it sounds practically impossible. You’re so hopped up on temptations, then hormones -- stimulated or out of whack -- and of course you want to be cool with the In Crowd. But just to ask the question, like Joey did, is a giant step in the right direction!

The secrets of abstinence aren’t secrets in the same sense that you tell your friends secrets, like “I went out with Becky this last weekend and oo-la-la! Don’t tell my mom or anyone, cross your heart and hope to die.” Those are secrets you just don’t want anyone to know, although, to be honest, they're are also the hardest secrets to keep. Because your friends are just dying to tell someone, then that person will tell someone, and quickly even your mother knows, your grandmother, all the way up to the oldest grandmother in town. Joey did what?! Is Becky pregnant? You think so, with triplets!?

These are a different kind of secret, something virtually unknown because it takes discipline and determination. With some intermediary steps that are key, as unbelievable as they sound. More about that later. If you can get it together, though, it'll be great. But you have a ways to go!

The secrets of abstinence don’t primarily have anything to do with chemicals in test tubes. Although I’m sure, say, you’re in a foreign military elite corps they might fix you chemically, zapping you once and for all, then following up the original fix with progressively stronger doses to kill any last traces of virility or libido, until you’re not only limp as a noodle but cloistered and with the sexual appeal of wallpaper, But let’s say you don’t want anything that strong. You might want to save your sexuality in the possible event that you might want children someday. Farfetched but possible.

The actual secrets of abstinence are a matter of conditioning your mind and having the killer instinct to say “No! No! Hell no!” Then, in metaphorical terms, to run fleeing out the door, making your escape across hill and dale toward the horizon, kind of like what you used to see at the end of cartoons. In short, you don’t give in. You take a strong pose, you have a scowl on your face, your will is iron, you plant your feet, you’re a brick wall, impervious, impenetrable, and additionally not willing to penetrate anyone else.

In any conditioning you need to go over it again and again. Until they're about ready to throw you in the loony bin. The key is not to assume you've made it when you've lost your libido for a short time, say a month. But to make it rock solid, wearing a sign on your neck, "Stand back, 99% abstinent." Not only that but you want to condition others to want to stay away from you. So make sure you talk about your revulsion to sex with everyone you meet. As far as they know, that's all you can talk about. You accomplish two things, 1) You make the point clearly; 2) No one wants to be within a mile of you.

Then, by now you're a complete pariah with no friends and no chances for action. With no one being near you or wanting to be near you, you disappear into the wilderness, perhaps going as far north as possible. You'll be in good company, because up north, Minnesota, Canada, everyone's naturally frigid because of the weather. Even if you were to briefly lose your mind and pull down your zipper, they'd only laugh at you. Before long, they'd take pity and have it professionally welded shut. All temptation would quickly vanish.

But if you still haven't sealed the deal in your own mind, there actually are chemicals. I only mention it in a wink-wink way, never actually endorsing them. No, no, no, never! Anyway, there's this guy. An alley in a particular town, a former doctor, non-certified, and you can buy the stuff by the case, if you know the password. The password is "Grandma Slump." You didn't get it from me, OK?
Posted by dbkundalini at 6:00 AM